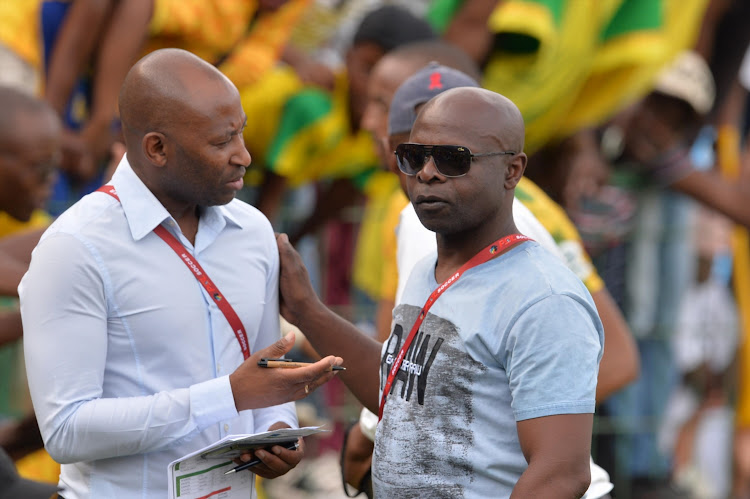 Daniel Mudau‚ the second highest top scorer in Premier Soccer League history‚ has paid tribute to the contribution that his former Mamelodi Sundowns strike partner Philemon “Chippa” Masinga had on South African football‚ and himself.

Mudau‚ the diminutive striker known as “Mambush” for the scurrying goal-poacher that he was‚ formed a deadly partnership with big centre-forward Masinga at Sundowns from 1992 to 1994‚ which was brief but still remembered as one of the best seen in SA football in the 1990s.

It was broken up when Masinga moved to Leeds United‚ along with Kaizer Chiefs’ Lucas Radebe.

Mudau went on to become the PSL’s top scorer with 110 goals‚ a record broken by AmaZulu striker Siyabonga Nomvete in October 2017.

“I personally feel that I have lost a great person and a great leader. Because Chippa was not an ordinary player‚” Mudau said.

“He made an immense contribution to South African football. He scored the goal against Congo [at FNB Stadium in 1997] that took us to our first World Cup in France [in 1998].

“I played with him at Bafana Bafana and Mamelodi Sundowns. After I went to Ratanang Maholosiane‚ he signed for Sundowns in 1991‚ and in 1992 I came back.

“And we became two deadly strikers. He told me that‚ ‘With my experience‚ Mambush‚ you are going to learn a lot from me’. And I did learn a lot.

“Chippa was a year younger than me‚ but I took the words he said seriously‚ and made sure that I put them into the field of play.”

Mudau said Masinga’s physique allowed the diminutive “Mambush” to scurry many goals feeding off the scraps of the big centre-forward.

“We were playing for Bafana against Zimbabwe in Mmabatho. Bruce Grobelaar was the Zimbabwe goalkeeper‚” Mudau recalled.

“There was a corner kick where I somersaulted and Chippa was there to finish.

“It was a great goal. People were talking about how Mambush and Chippa made a deadly combination.

“And it was true‚ and not only from that. I remember playing against Pretoria City in Eersterus. City scored a goal and it was chaos.

“Chippa’s brother‚ Bennett Masinga‚ was playing behind us and he said‚ ‘No man‚ let’s go and put the ball on the centre’.

“Yes‚ Chippa made me score those five goals [that followed]‚ because you know what‚ he was shielding those defenders‚ making sure that he was in the air. And I had to make sure‚ when he was in the air‚ that I went the other side.

“I managed to score five goals that day‚ and it was from the contribution of Chippa.”

Mudau finished his career at Sundowns‚ where he scored a total 155 goals.

Masinga‚ signed by Sundowns from Jomo Cosmos‚ went on from Leeds to St Gallen in Switzerland‚ Salernitana and Bari in Italy and Al Wahda in Abu Dhabi.