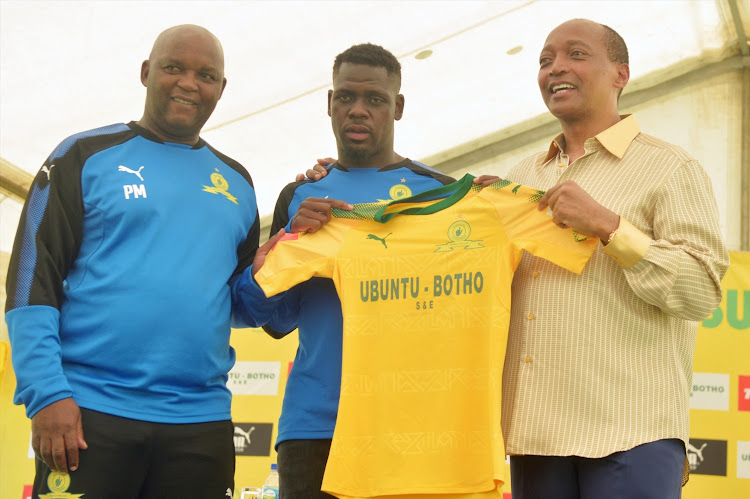 Defender Siyabonga Zulu (C) during his unveiling as a Mamelodi Sundowns new player on January 17 2018 at the club's headquarters in Chloorkop. Flanking him is the club president and billionaire owner Patrice Motsepe (R) and head coach Pitso Mosimane.
Image: Lefty Shivambu

Chippa United are planning to take a massive gamble and offer troubled former Mamelodi Sundowns defender Siyabonga Zulu a chance to revive his rapidly spiralling career in the Eastern Cape.

Sundowns terminated the wayward but talented Zulu's contract in his absence last week after he failed to report for duty at the club's Chloorkop headquarters for more than a month.

Insiders told TimesLIVE that Zulu is expected to arrive in Port Elizabeth on Tuesday to put pen to paper with the Chilli Boyz.

The move is dependent on Zulu working on his fitness as he has not played competitive football for weeks after going AWOL while at Sundowns.

He will also be asked to commit to professional behaviour and not disrupt the team as they begin their attempt to move out of the relegation zone.

An intermediary (agent) at Zulu’s agency Prosport International‚ Alban Newman‚ did not want to comment on the latest developments while Chippa’s new chief executive Morgan Mammila could not be reached on his mobile at the time of publishing.

The second-from-bottom Chippa‚ who are sitting perilously close to the relegation quicksand‚ have managed a paltry 12 points from 17 matches and are looking for an experienced campaigner to provide stability at left-back where they have largely inexperienced Phetso Maphanga‚ Nkosinathi Mthiyane and Tebogo Tlolane.

Zulu was recruited to Sundowns by coach Pitso Mosimane from Platinum Stars at the beginning of the season but the former Bafana Bafana player found playing opportunities limited as he was below Tebogo Langerman and Lyle Lakay in the pecking order.

Mamelodi Sundowns have terminated the contract of troubled former Bafana Bafana defender Siyabonga Zulu‚ who has not reported for training for almost ...
Sport
2 years ago

Troubled Mamelodi Sundowns defender Siyabonga Zulu has not reported for work for almost a month and has not set foot at the club's Chloorkop ...
Sport
2 years ago

As a result of seeing little game time‚ Zulu grew increasingly despondent and this led to several transgressions of the club’s policies.

He appeared before two disciplinary hearings last year where he promised to mend his ways.

But he disappeared without trace last month and the club eventually terminated his lucrative contract in his absence after he failed to show up for a disciplinary hearing that was held at the club’s headquarters at Chloorkop on December 23.