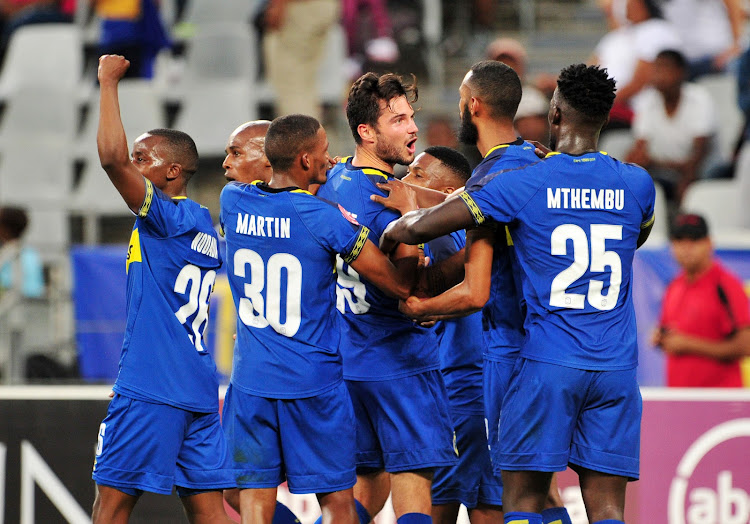 Cape Town City midfielder Roland Putsche (C) celebrates with teammates after scoring one of his two goals during a 5-0 Absa Premiership romp over Free State Stars at the Cape Town Stadium on January 16 2019.
Image: Ryan Wilkisky/BackpagePix

Putsche added to his strike against Baroka FC at the weekend with a brace, one from the penalty-spot, while the excellent Links also bagged two to go with a goal from Siphelele Mthembu.

Woeful Stars never really looked like scoring and finished the game with 10 men as Sifiso Hlubi received a straight red card for a poor tackle in the second period.

The home side also lost a player late on when defender Taariq Fielies received a straight red, which will have more of an impact for the side in coming games.

The result sees City move to within six points of league leaders BidVest Wits from the same number of games, while Stars remain four points above the relegation zone, though they have played a game more than their rivals.

City coach Benni McCarthy made two changes from the side that were held to a 2-2 draw by Baroka, bringing in left-back Zukile Kewuti for suspended Ebrahim Seedat, and switching Thato Mokeke to midfield as Kwanda Mngonyama replaced Ayanda Patosi.

Stars had just a single change from the 2-1 win over Maritzburg United a week ago as suspended captain Paulus Masehe was replaced by Hlubi.

Yusuf Jappie had an early chance for the visitors when he steered a volley on target, but Peter Leeuwenburgh in the City goal was able to make the save.

From then on it was all the home side in the opening period as they maintained the majority of possession and created a number of chances to score.

Craig Martin got behind the Stars defence but his excellent ball across the six-yard box eluded his teammates, who were not on hand to concert.

Putsche then fired wide from the edge of the box and a low cross from Links only just eluded Mthembu six yards from goal.

Links was at it again 10 minutes before the break when his trickery saw him get to the byline and supply a superb cross that was headed over.

City got their reward just a minute later though when Putsche was left completely unmarked to head home a Martin corner.

It was a soft goal for the visitors to concede, but delight for the home side who led at the break. The advantage was doubled on 52 minutes when Putsche coolly slotted home a penalty after rampaging right-back Thami Mkhize had been felled in the box and referee Kulasande Qongqo.

Stars’ plight got worse shortly afterwards when they were reduced to 10 men as Hlubi’s tackle on Mkhize was deemed a straight red card by Qongqo.

The match officials appeared to get both big calls correct and there ended Stars’ realistic hopes of getting anything from the game.

City scored a third just past the hour-mark as Martin turned provider again, his low cross was deflected into the path of Links, who crashed the ball into the top corner.

It then became not a question of whether City would win, but how many goals they would score and they added a fourth when Kewuti’s low cross was turned home by Mthembu.

City continued to press for more goals and handed a second appearance to Kermit Erasmus off the bench as he works his way back to full fitness.

They got their reward when good work from Martin set up Links and he combined with the hard-working Thami Mkhize for the simplest of tap-ins.

City also finished the game with 10 men when centre-back Fielies fouled Sinethemba Jantjie as the speedy forward raced through on goal.