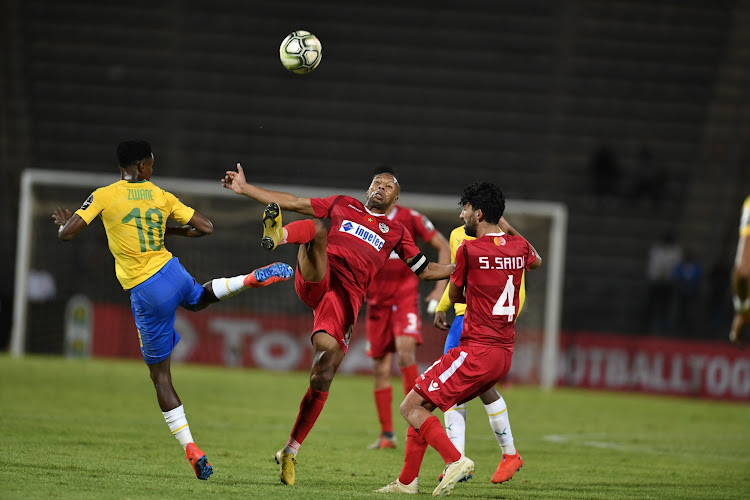 Mamelodi Sundowns management have rubbished claims that they were discourteous to CAF Champions League opponents Wydad Casablanca and failed to provide transport to the Moroccans when they arrived at OR Tambo Airport last week.

Sundowns beat the visitors 2-1 in a highly charges group stages encounter that was marked by tense scenes at the Lucas Moripe Stadium on Saturday.

Reports suggested that the visitors were unhappy with their hosts after they could not get a team bus at the airport as stipulated in the CAF rules and the tension spilled over onto the field of play.

Senior Sundowns official Yogesh Singh said Wydad landed in SA without sharing their itinerary with their hosts and this threw their plans into disarray.

He insisted that despite these challenges‚ the Brazilians still made logistical arrangements for the players and officials as the per rules of the competition.

“They didn’t confirm when they were going to arrive in the country but we arranged everything for them.

Wydad Casablanca found no-one waiting for them at the airport from Mamelodi Sundowns and apparently had to use taxis. #CAFCL pic.twitter.com/QHEezcuUeK

"We had all the things booked for them in the form of the bus and the cars and when we found out that they were already in the country‚ we organised everything for them‚” said Singh.

“It is about communication.

"Competition rules stipulate that they must communicate their itinerary to their confederation‚ who must then tell the South African Football Association and we then get all the information from Safa.

"We made the arrangements by hiring the bus‚ the cars but they did not tell us anything about their itinerary."

Sundowns coach Pitso Mosimane slammed Wydad for arriving in the country without communicating with them.

“They skip into the country without talking to us‚ even Zamalek did the same‚ and they say we don’t give them a bus‚" Mosimane said.

"We gave the guys from Equatorial Guinea and Libya a bus and they say we didn’t want to give them a bus.

"We don’t belong to man‚ we are a Champions League team.”

Singh said they have adapted to the challenges on the continent and they now always have a Plan B when they travel.

“When we went to Nigeria recently‚ we had Plan B because we knew what to expect‚" said Singh.

"They did not allow us to train for two days on the synthetic pitch but we had an alternate venue.

"We are not new in Africa and we are streetwise.

"Last year they took a flight and they did not have permission to land somewhere and refuel and we helped them by getting permission from the department of International Relations.”

The match between Sundowns and Wydad‚ where Themba Zwane scored a brace as the Brazilians got their group stages campaign back on track‚ was highly charged with numerous stoppages as tensions threatened to boil over.