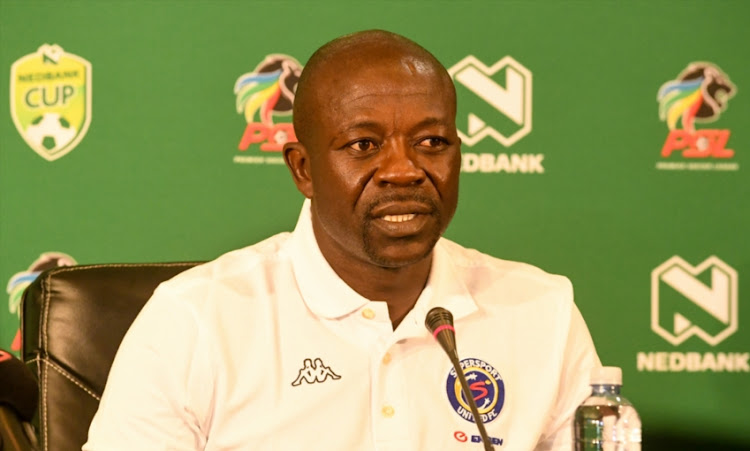 SuperSport United coach Kaitano Tembo insists there is still much to play for this season following an early exit from the Nedbank Cup‚ but he is worried about the depth of his squad in the second half of the Absa Premiership campaign.

SuperSport United coach Kaitano Tembo insists there is still much to play for this season following an early exit from the Nedbank Cup‚ but he is worried about the depth of his squad in the second half of the Absa Premiership campaign.

SuperSport were brushed aside 2-0 by Cape Town City in the Nedbank Cup Last 32 on Saturday‚ with Tembo pointing to a lack of depth on the bench as one of the team’s problems in this fixture where they always looked second-best.

"If I look at my bench‚ I've got Kamo [Kamohelo Mahlatsi]‚ who has been playing in the MDC [MultiChoice Diski Challenge]‚ and Kagiso [Malinga]‚ who was playing in the ABC Motsepe League. We lack in depth‚” Tembo said.

It is a situation not helped by the continued self-imposed absence of veteran winger Thuso Phala and what looks a likely move for Fagrie Lakay to BidVest Wits this month.

"We want to [sign players]‚ but it is difficult. I must try and work with what I have. Players are going out but no players are coming in. I must try and get the best out of the players we have‚” said Tembo adding that he was unsure of the latest situation surrounding want-away star Phala.

"The club will make a statement about Thuso Phala‚ at the moment I have no idea what is going on.”

He also revealed he was worried by a lack of “fight” among his players against City.

"It is disappointing‚ but to be honest we didn't deserve to go through‚” the coach said.

“City dominated the game and got into good areas. We created a few chances on transition that we did not take – Aubrey [Modiba] was one-on-one with the goalkeeper‚ as well as Bradley [Grobler].

"But in terms of their overall performance‚ I think they wanted it more than us. We did not come here to fight‚ because if you come to a place like this‚ where they have a very good home record‚ you need to fight for a result."

It would take run of extraordinary proportions for Matsatsantsa to mount a title challenge‚ but Tembo insists they must push on to finish as high in the league as possible – perhaps for his own job security.

"We want to finish in a respectable position‚ we still have 12 games to go‚ which is 36 points‚ it is a lot of points‚” he says.

“We need to try and change our mindset and focus on the league.”

Four of SuperSport’s next six games are at home‚ though they are next in action on February 10 when they travel to Lamontville Golden Arrows.