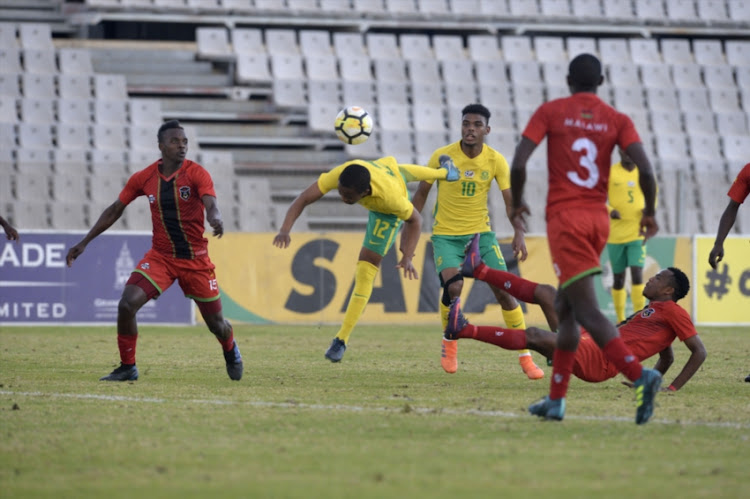 Nkosingiphile Ngcobo of South Africa during the 2019 Africa U20 Cup of Nations, qualifying match between South Africa and Malawi at Moruleng Stadium on July 15, 2018 in Rustenburg, South Africa.
Image: Lee Warren/Gallo Images

Siphesihle Mkhize scored a vital equaliser for South Africa as they came from behind to secure a 1-1 draw against hosts Niger in their opening Group A encounter at the African Under-20 Championships in Niamey on Saturday.

Niger, making their debut in the continental finals, opened the scoring through Abdoul Amoustapha having largely dominated the first hour, but M Tigers youngster Mkhize came off the bench to rescue a point for Amajita.

That goal stunned the capacity crowd, who were vociferous in their support for the home team, and provides a solid start with old foes Nigeria up next on Tuesday.

Only the top two teams in each pool advance to the semi-finals, which will in turn provide a ticket to the FIFA Under-20 World Cup in Poland that starts in May.

With regular number one Khulekani Khubeka not available, Glen Baadjies was preferred with Orlando Pirates forward James Monyane leading the line in the absence of Lyle Foster, who was not released by French club Monaco for the tournament.

Foster's physical presence up front was missed against the powerful Niger defenders, who bullied their more skillful South African opponents.

Defender Keenan Abraham saw his header saved by home goalkeeper Khaled Ibrahim, while Monyane flashed a shot over the bar as the teams went into the break level at 0-0.

Niger continued to see more of the ball without really testing Baadjies in the early part of the second half, while at the other end Sibusiso Mabiliso's cross eluded Promise Mkhuma in the box.

The home side had the lead on 64 minutes when Amoustapha supplied the finish after AmaJita failed to clear a loose ball in the box, much to the delight of the home crowd.

But the lead lasted just seven minutes as Ngcobo's set-piece was headed home by substitute Mkhize.

Amajita were unable to create much after that and will take the point, albeit in the knowledge that tougher assignments await with Burundi also in the pool.