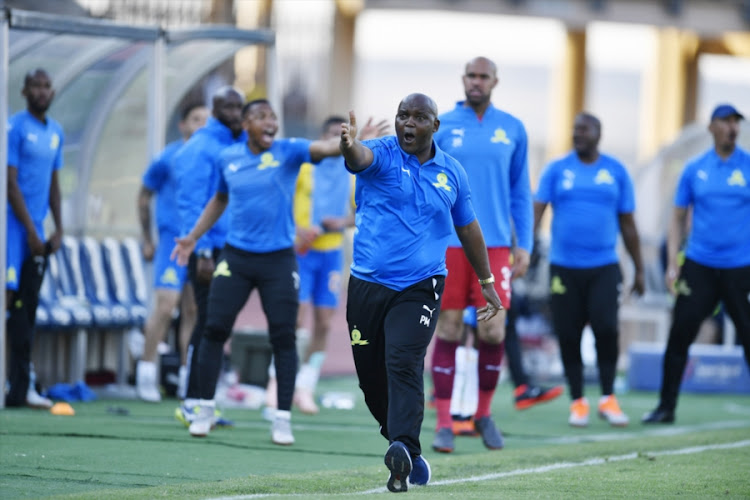 Pitso Mosimane and his bench protest to the referee after a decision went against Mamelodi Sundowns during a draw with log leaders Bidvest Wits.
Image: Lefty Shivambu

Mamelodi Sundowns face the prospect of being docked a point after the Premier Soccer League have charged them with contravening the National Soccer League handbook in a case that dates back to October.

Sundowns stand accused of fielding defender Wayne Arendse in the 1-1 draw with BidVest Wits on October 7‚ despite the fact that he did not appear on their original team list of 18 players for the match.

This is in contravention of regulation Rule 16.3.2‚ which states that players may be moved from the bench into the starting line-up before a game begins‚ but no-one from outside of the match-day 18 can be added.

Arendse played the full 90 minutes for Sundowns‚ but it could cost them the point they gained there and potentially hand an extra two to title rivals Wits.

Ajax Cape Town were not only docked points from matches last season for fielding ineligible striker Tendai Ndoro‚ but the effected games were also handed as 3-0 result to their opponents.

If that is the outcome in this case‚ it would move Wits nine points clear of the defending champions Sundowns.

The PSL have also turned their attention to Chiefs coach Ernst Middendorp and are following through on charges of alleged misconduct from his last spell at Maritzburg United that came to an end over two years ago. “Middendorp is alleged to have made improper statements concerning the acting CEO of the PSL [Mato Madlala] and the appointment of match referees to Maritzburg United matches‚” a PSL statement on Monday said.

The matter has been postponed to February 14 so as to not hinder Chiefs’ preparations for the Soweto Derby on Saturday.

Meanwhile‚ Bidvest Wits‚ their CEO Jose Ferreira and defender Robyn Johannes have been charged “with bringing the League into disrepute and making improper statements regarding a match official” after the latter was red-carded by Victor Gomes near the end of Wits’ loss to Chiefs last month.

Johannes was upset that he had received a second red card from Gomes this season and the parties will hear their fate on Thursday.

Finally‚ Black Leopards and their coach Dylan Kerr have been charged with “misconduct arising from abusive and insulting utterances towards a match official and contemptuous‚ discriminatory and disparaging remarks to the match commissioner” following their 2-1 win over Baroka Fc in early January.

They will also appear on Thursday.