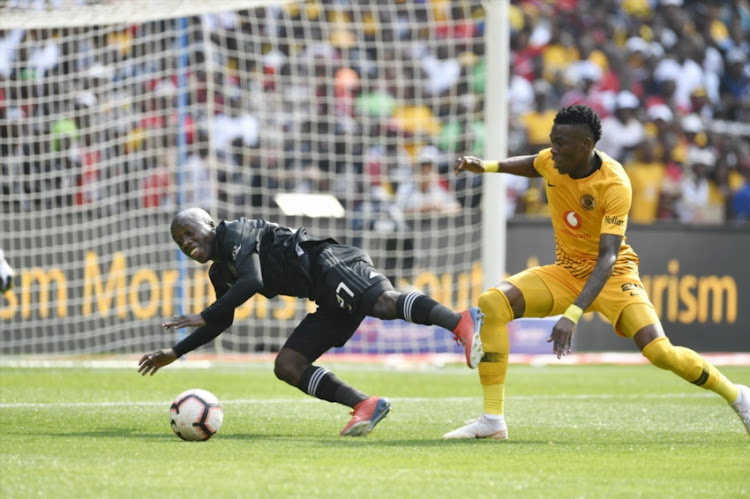 The 166th Soweto derby was brutally fought out at a pace that kept a capacity crowd on the edge of their seats‚ as Kaizer Chiefs and Orlando Pirates sharing the spoils 1-1 ultimately seemed the fairest result.

Some 87‚000 supporters braved a sun-baked FNB that was hot enough for referee Abongile Tom to call first-half water breaks in the Absa Premiership fixture.

Chiefs controlled much of the game‚ leading to Daniel Cardoso putting them ahead via a 53rd-minute penalty.

Pirates only notably lifted their tempo after conceding‚ and then might have wished they had displayed that level of aggression going forward from the start‚ Thembinkosi Lorch equalising in the 80th.

Overall‚ though‚ it was another furiously competitive derby‚ played at a breakneck pace‚ if perhaps just lacking the skill and refinement much sentimentalised over from the game's glorious past.

Chiefs might have felt they edged the chances‚ and could have ended an 11-match winless derby streak. But Pirates certainly weren't letting Amakhosi do that with any degree of comfort.

Most of those questions were answered in the affirmative‚ and Middendorp's ability to keep opposition coaches guessing has been a feature of his second tenure at Chiefs.

It probably played a role in him remaining unbeaten in derbies going back to his first spell at Naturena.

Daniel Akpeyi debuted in goal for Chiefs‚ following the woes of Virgil Vries standing in for injured Itumeleng Khune. The Nigeria international was the less active of the two goalkeepers‚ Wayne Sandilands being called into play far more often for Pirates.

Bucs just seemed to freeze for the first hour. They only pushed forward with confidence after Chiefs had scored.

Daniel Cardoso and Teenage Hadebe could take much credit for that‚ though‚ towering in Chiefs' central defence.

WATCH | Meet the die hard fans at the Soweto derby

The match got off to a cracking start‚ but faded into an all-too familiar derby midfield brawl as the first half wore on.

A string of chances came in an end-to-end opening 15 minutes - though more in the direction of the goal in front of the northern stand that Chiefs were attacking.

Leonardo Castro's feed to Khama Billiat was straight to the feet of Alfred Ndengane‚ who hesitated for Billiat to nab the ball back and shoot powerfully at Wayne Sandilands. Castro headed the resultant corner over.

For Pirates‚ Ben Motshwari was dispossessed on a run into the box‚ Xola Mlambo striking the loose ball well wide.

Philani Zulu replaced Mashiane - a little overawed by the magnitude - from the break. And Chiefs continued to edge the derby‚ as Parker's drive came close.

If anyone could turn Amakhosi's barren derby run‚ it was Billiat. In the 52nd the Zimbabwean stole the ball off Asavela Mbekile just inside his own half and ran length of Pirates' half. He was fouled by Mbekile‚ chasing back‚ on the left edge of Bucs' area‚ and Tom pointed to the spot.

Daniel Cardoso stepped up and struck low and to the left of Sandilands.

Bucs then did play with the forward momentum they should have perhaps earlier displayed.

Their pressure and tempo resulted in Hendrick Ekstein being dispossessed to allow Motswari to lay on beautiful throughpass that saw Lorch beat offside‚ round Akpeyi‚ and finish.