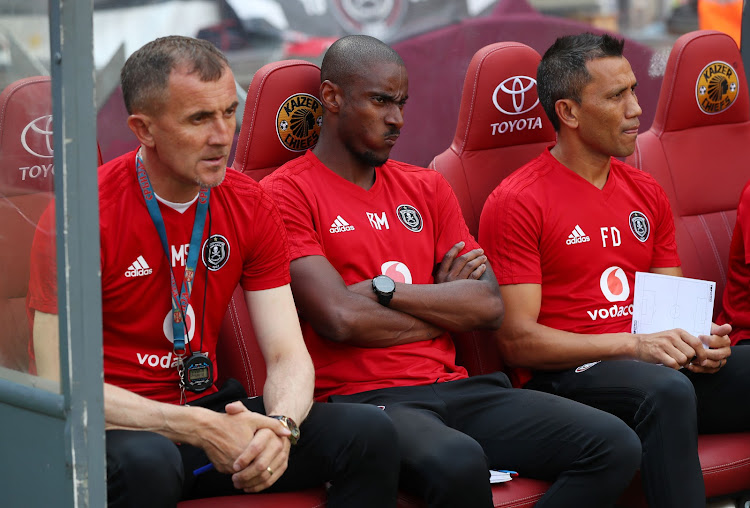 Orlando Pirates Serbian head coach Milutin Sredojevic (L) looks on from the bench during the Soweto derby Absa Premeirship 1-1 draw at FNB Stadium on February 9 2019. Alongside him are his assistants Rulani Mokoena (C) and Fadlu Davids (R).
Image: Samuel Shivambu/BackpagePix

After dropping two crucial points that could have strengthened their ambitions to win the league title this season‚ Orlando Pirates coach Milutin Sredojevic admitted that they were not at their best in the 1-1 draw against Soweto rivals Kaizer Chiefs at FNB Stadium on Saturday.

In a match they were expected to dominate after winning the three previous clashes against Chiefs‚ Pirates were rescued by Thembinkosi Lorch’s 80th minute equaliser to earn their ninth draw of the season in the 19 league matches they have played.

The draw‚ a second one in a row after gaining the same result against Baroka FC last month‚ does not help Pirates as they remain four points behind leaders Bidvest Wits‚ who had earlier in the day done the Buccaneers and Mamelodi Sundowns a huge favour when they lost 2-1 away to Highlands Park.

But the Pirates coach admitted that his team‚ which only started to test Soweto derby debutant Daniel Akpeyi in Chiefs goals in the last 20 minutes‚ were always chasing shadows in this match and never got to execute what they had planned to do.

“Both teams showed an intention to win which was end to end stuff‚” said Sredojevic of the game they struggled to create clear cut chances.

“We did not get that extraordinary performance from the players and didn’t cover the space we were supposed to.

"In certain aspects we lagged behind in relation to what we were supposed to do.

“But it is not about what you want to do‚ but it is what a good opponent allows you and I give absolute credit to Kaizer Chiefs.

“We stretched ourselves and tried our best same like them. And with all what we have seen there might be regrets but in football it’s not what you deserve but what you get.”

Pirates flew to Tunisia after the game to meet African champions Esperance in Tunis in what will be their fourth round encounter in the Caf Champions League group stages on Tuesday afternoon.

The 166th Soweto derby was brutally fought out at a pace that kept a capacity crowd on the edge of their seats‚ as Kaizer Chiefs and Orlando Pirates ...
Sport
2 years ago

With a match in hand over Wits in the domestic league‚ Sredojevic’s team is still in the race although it has to be said that the biggest winners on Saturday were Sundowns who are three points behind Wits and have played three matches less than Gavin Hunt’s team.

Pirates will travel to Mbombela Stadium on February 20 to meet SuperSport United in their next league match while Sundowns have a chance to go on top of the table if they beat Polokwane City at Loftus Stadium on the same night.

But the match that everyone will be looking forward to is the top of the table clash between Sundowns and Wits at Milpark on February 23.