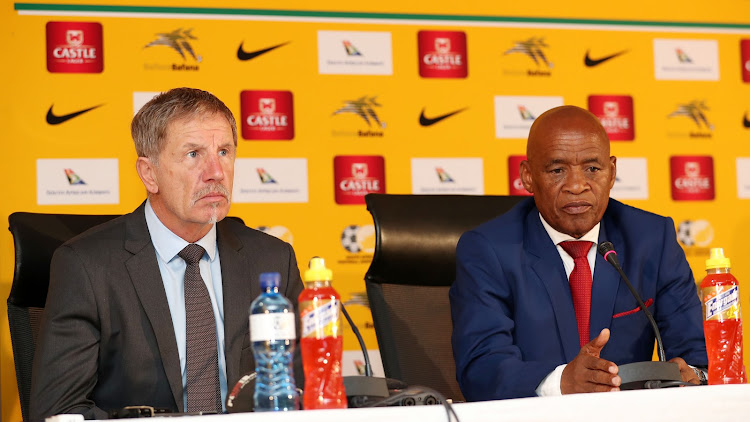 Bafana Bafana head coach Stuart Bexter (L) and the national team manager with Barney Kujane (R) during a media briefing at the SA Football Association headquarters in Nasrec in the south of Johannesburg.
Image: Muzi Ntombela/BackpagePix

Kujane was supposed to depart for North Africa to inspect facilities this week but Safa still have no clue whether the game will be played either in Tunisia or Egypt‚ and on which date.

Safa communications boss Dominic Chimhavi said the Libyans are yet to confirm the venue and date of the crunch encounter and the only thing they know is that it will be played on the weekend on March 22-24.

‘‘Our team manager (Kujane) was supposed to travel to the match venue this week to finalise logistics around the flights‚ accommodation‚ facilities etc. But he can’t do that anymore because there’s been no communication from Libya‚” Chimhavi said.

‘‘Where does he travel‚ is it to Egypt or is it to Tunisia? We still do not know and this impacts on our planning because we wanted to do things well ahead of the match. We don’t even know on which day this game will be played on.”

Bafana Bafana will hold a training camp in Tunisia at least one week before their key African Nations Cup qualifier against Libya next month to ...
Sport
3 years ago

Bafana are in second place in Group E with nine points behind leaders Nigeria‚ who have already qualified.

Libya‚ who must win to take second place in the group behind Nigeria and deny South Africa qualification‚ cannot host the game in their own backyard because of a long-standing Fifa ban over security concerns and must find a neutral venue.

The security situation in Libya is considered dangerous with various rival factions and war lords battling for control over the country’s oil wealth.

The Libyans have hosted their home games in either Egypt or Tunisia in recent years.

“When we didn’t qualify for the World Cup‚ I held myself hugely responsible‚” Baxter said.

Stuart Baxter stared down the barrel of a loaded gun on Wednesday and said he would quit his job as Bafana Bafana coach if the national team fails to ...
Sport
3 years ago

“I’ve got great difficulty debriefing a game properly because I’ve got to get over my worries first.

“So after the World Cup‚ I can only tell you that the whole World Cup campaign was difficult mentally for our players because of all the nonsense that was going on with the Senegal game."

Fifa ordered a replay of the World Cup qualifier between Bafana and Senegal and the original result (a 2-1 win for Bafana in Polokwane) was annulled after the match officiating raised suspicion.

The world governing body's investigation was triggered by betting patterns and it led to Ghanaian referee Joseph Lamptey being found guilty of match manipulation.

Senegal won the replayed encounter 2-0 but Bafana continued to habour slim hopes of somehow sneaking via the backdoor when they travelled to Dakar for the final group qualifier.

Safa have written to the PSL to ask for a postponement of matches on the weekend of March 15-17 so that Bafana Bafana coach Stuart Baxter will ...
Sport
3 years ago

“Right up until the last game we were hearing in the corridors‚ right up until when we were in Senegal playing it was still going to be overturned and ‘you had better keep going’‚" Baxter said.

“People asked why did I take such a strong team to Senegal and that’s why.

"It was still being echoed that we win tonight and we would get through.

Bafana only need to either draw or beat Libya next month to qualify for the Afcon finals in Egypt and Baxter has already said he would quit the national team if they fail to book a ticket to the continental showpiece in June.