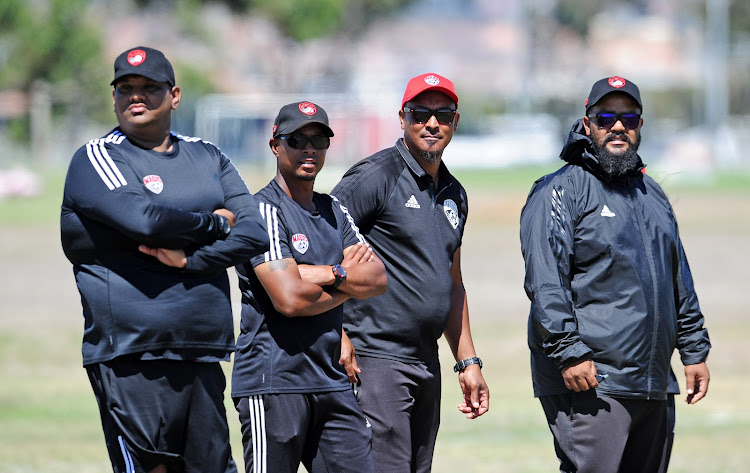 The players at amateur side Magic FC earn an average of R2,000 a month and the ABC Motsepe League club’s overall monthly budget sits at around R120,000 a month.

The players at amateur side Magic FC earn an average of R2,000 a month and the ABC Motsepe League club’s overall monthly budget sits at around R120,000 a month.

This is in stark contrast to star-studded Nedbank Cup last 16 opponents Kaizer Chiefs who receive a R26m annual grant from the Premier Soccer League‚ have several corporate backers in their corner‚ are supported by millions of fans around the country‚ sell millions in merchandise and have several players who earn way above Magic FC’s monthly budget.

The Chiefs parking area at the club’s world class Naturena headquarters in the south of Johannesburg would put many car showrooms to shame and the facility itself is worlds apart from life at Magic FC‚ where some players catch taxis or hitch rides to raining.

But it will be 11 vs 11 on the pitch when the Western Cape third tier side attempts to cause the biggest ever upset in the Nedbank Cup at Nelson Mandela Bay Stadium on Sunday afternoon.

Thando Mngomeni has conceded that some of his Magic FC teammates are staunch Kaizer Chiefs fans and he's pleaded with them to forget about their love ...
Sport
2 years ago

“Jeez‚ where do I start?‚” the former Bafana Bafana and AmaZulu striker quipped.

“Our average training remuneration is R2,000 per player. As a third division team‚ we don’t pay salaries but we remunerate the players for training.

‘‘That is obviously nowhere near the salaries that they pay at Kaizer Chiefs and our monthly budget is sitting at about R120,000 a month.”

Their modest training venue at the Old Mutual Sports Grounds in Cape Town is a far cry from the manicured fields at Naturena where Amakhosi players have access to some of the best facilities in the country.

“Some of our players are still studying and they use public transport to get to training.

‘‘That’s the reason we changed our training from evenings to mornings so that guys have time to travel home because some of them struggled with transport at night‚” he said.

The Magic FC say they have a surprise in store of Kaizer Chiefs in their Nedbank Cup Last 16 clash at the Nelson Mandela Bay Stadium on Sunday‚ and ...
Sport
2 years ago

“The average monthly bill for most teams in our league is less than R120,000 but we are spending a little bit more because we are chasing promotion.

‘‘It is not easy operating in this league because what we get from the league is just not enough.

"For an example‚ the team that finished second last season got R30,000 and it cost us R45,000 to honour a league match in Beaufort West because we are based in Pinelands.”

As expected‚ Magic FC have players and members of staff who are staunch Chiefs fans but Dearnaley said he and chairman Miles October have been assured that their priorities on Sunday will be about the side that puts bread on their tables.

“The other day I was going to drop our midfielder Lihle Maqoqa to school and he told me that he is a Chiefs fan and his favourite players are Khama Biliat and former midfielder Arthur Zwane.

"But he promised me that he would be going all out to knock them out of the cup. Our team manager Anella Botha is also a big Chiefs fan but his focus will be on us on Sunday‚” he said.

Despite the odds they face going into this match‚ Dearnaley is confident that his boys will be up to the task against the mighty Amakhosi and he's banking on experienced players like Thando Mngomeni.

“The fact that Chiefs struggled to beat another lower division team in the last round was a wake up call for them and I am sure that they are not going to take us for granted.

"But‚ I have confidence in our boys.

"I am confident that they will be up for it because they are determined to impress and we have a few players with experience‚” said Dearnaley.

The most experienced player in their team is former Bafana Bafana‚ SuperSport United‚ Mamelodi Sundowns and Bidvest Wits midfielder Mngomeni and coach David Kannemeyer played at the highest level domestically where he achieved a lot of success.

“We appreciate the value of a player like Thando because he passes information to the younger guys and Kannemeyer won league titles as a player‚" he said.

"This is as big as it gets and I hope that our boys enjoy the experience and take this team into the next round."