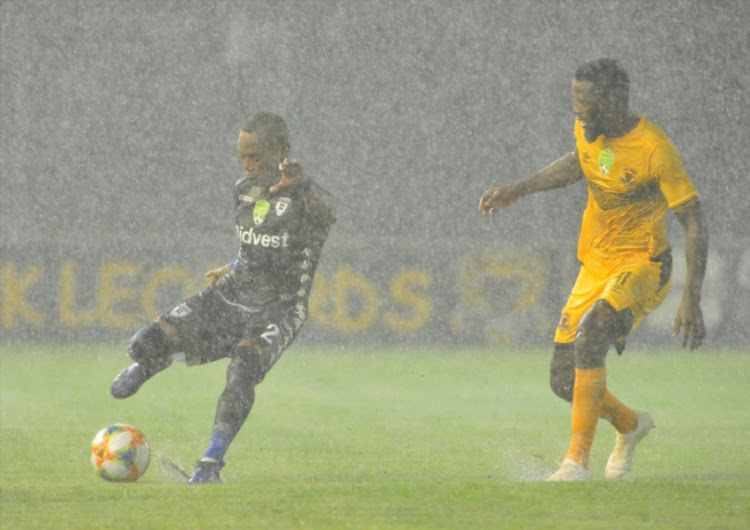 A torrential storm brought a premature end to the opening game of the second round of the Nedbank Cup as the referee called off the clash between Black Leopards and Bidvest Wits after the heavens open and a torrent of water came bucketing down from the heavens in Thohoyandou on Wednesday night.

The rain began to fall some 20 minutes into the game and, accompanied by a strong wind, continued to lash down for over an hour.

Leopards had taken a 37th minute lead through Lesedi Kapinga as they looked to add the scalp of the league leaders to the scalp of Orlando Pirates, who they had beaten at the Thohoyandou Stadium in the first round.

But with two minutes to halftime, the rain had caused deep puddles on the pitch and the ball was getting stuck in the wet, endangering the safety of the players and ruining any chance of a decent footballing spectacle.

Gift Motupa will likely miss out on a chance to get back among the goals again as he is struggling with a groin injury and could miss out on BidVest ...
Sport
3 years ago

It did not take long after the referee ordered both teams to the change rooms for the match commissioner Robert Sithole to officially call the game off.

PSL chief operations officer Ronnie Schloss said from the event: "The referee and his officials met after they stopped the game and they've assessed the conditions to be dangerous for the players.

"The league will meet tomorrow and will re-fixture it. The match will start from scratch as a new match. The goal is expunged from the records."

Both are not due to play again until next Saturday, Feb 23 in the case of Wits and Sunday, Feb 24 in the case of Leopards. It would seem easy therefore to fit in the tie this weekend.