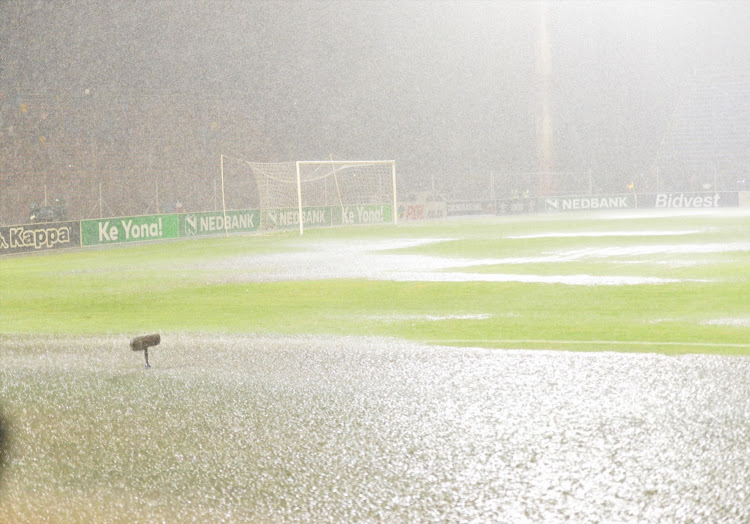 A general view of the water-logged pitch at the Thohoyandou Stadium in Venda, Limpopo, during the Nedbank Cup last 32 match between Black Leopards and Bidvest Wits on February 13 2019.
Image: Philip Maeta

The Premier Soccer League will make a decision on Thursday about the re-arranged Nedbank Cup tie between Black Leopards and Bidvest Wits after the two clubs failed to agree on where and when to play again.

The game was abandoned on Wednesday night after a vicious storm caused flooding in Thohoyandou and elsewhere in Venda.

Wednesday’s game was called off after 43 minutes as the rain came lashing down.

The impressive storm continued for some two hours thereafter trapping the players in the dressing room.

A torrential storm brought a premature end to the opening game of the second round of the Nedbank Cup as the referee called off the clash between ...
Sport
2 years ago

The flooded pitch made it impossible to continue and there was a meeting not long after the game was abandoned by referee Eugene Mdluli to try and find an alternate date and venue.

The two clubs met with PSL representatives in one of the change rooms but could not reach an agreement.

Wits are not keen to make the long journey back to Thohoyandou and might be helped by the weather forecast‚ which predicts several days of rain in Venda.

This weekend President Cyril Ramaphosa is due to hold a rally at the stadium to launch the African National Congress’ election manifesto.

The players at amateur side Magic FC earn an average of R2,000 a month and the ABC Motsepe League club’s overall monthly budget sits at around ...
Sport
2 years ago

It is expected that with the wet surface and all the people and stage on the field‚ the pitch will be not be suitable‚ which means Leopards must look for an alternate venue.

The game could go to either Giyani or Polokwane‚ which means Leopards lose a considerable advantage.

The PSL should announce later on Thursday or Friday what the new plans are.