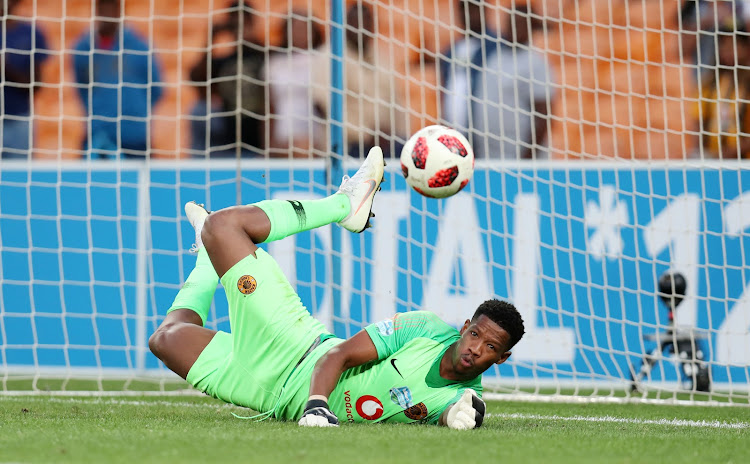 Virgil Vries of Kaizer Chiefs saves a penalty during the 2018 Telkom Knockout Cup match between Kaizer Chiefs and Black Leopards at the FNB Stadium, Johannesburg on 21 October 2018.
Image: ©Muzi Ntombela/BackpagePix

Virgil Vries “did not grab his chance” in the past stint where the goalkeeper made some costly errors coming in to replace injured Itumeleng Khune in a handful of matches‚ Kaizer Chiefs coach Ernst Middendorp has said.

Middendorp said that was the reality of the situation‚ and that it led to Chiefs buying Nigeria international Daniel Akpeyi from Chippa United to bolster their goalkeeping department.

Akpeyi made a competent debut between the posts in Saturday’s 1-1 Absa Premiership Soweto derby draw against Orlando Pirates at FNB Stadium.

The Nigerian will not be fielded in Chiefs’ Nedbank Cup last-16 clash against third division The Magic FC at Nelson Mandela Bay Stadium on Sunday (kickoff 3pm)‚ with Vries also relegated from the starting lineup and Bruce Bvuma set to take the gloves.

Middendorp was asked if‚ with five goalkeepers – Brylon Petersen turns out for their reserve side – now in Chiefs’ senior squad‚ and Khune set to return at the end of the 2018-19‚ one of them might have to make way at the end of the season.

“I had a long chat with Bruce before the derby‚ and after we signed Daniel Akpeyi‚ just to make it very clear that he is a very qualified player with huge potential‚” Middendorp said on the signing of Akpeyi‚ seemingly relegating both Bvuma and Vries down the pecking order.

“But we had to decide – is he really prepared at the moment‚ is he really regularly on the field at the age of 23‚ [even though] the training impressions of him are fantastic?

“‘And let’s be prepared so that you are strong enough‚ looking into the goalkeeper situation now with Daniel there‚ and learn and probably the next 10 years are in front of you’.

“So‚ I think he was listening to that‚ and thought about it. And of course‚ there is no doubt about it‚ he probably thought it was his time‚ and he might have been disappointed.

“But OK‚ what will happen in summer in terms of releasing players‚ I think it’s a bit early to think about it.

“Just what we must stay at the moment is that Virgil Vries didn’t grab his chance.

“Let’s take that and make it very clear – for this [past] time that’s the reality of it.

“So‚ OK‚ we have taken him out a bit‚ to protect the potential of Virgil Vries‚ and then we will see what time brings.

“I don’t know what the management or club response will be. We’ll decide in June‚ and that will be discussed and decided around a table.”

Chiefs laboured to a 1-0 win against Magic’s fellow ABC Motsepe League campaigners Tornado FC in the previous round of the Nedbank. The Magic beat National First Division Maccabi FC on penalties.