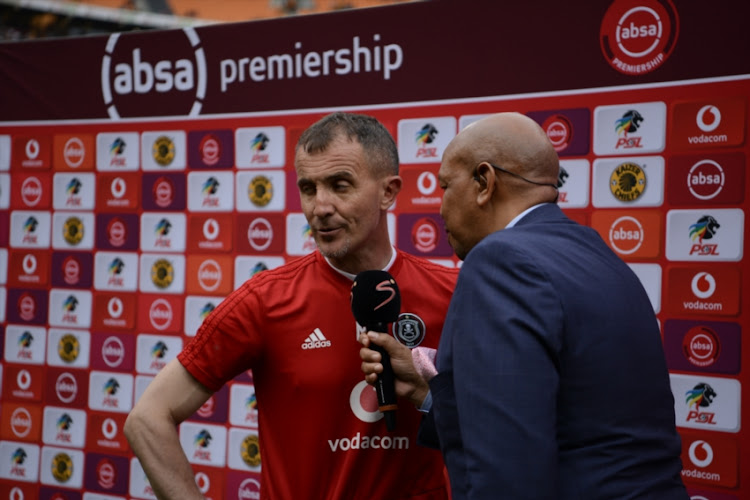 Orlando Pirates coach Milutin Sredojevic finds it hard to explain why his team appears to have a recent tendency for conceding first‚ and only then playing at their best after that.

That propensity appeared to be in full view again as Pirates on Tuesday night were flat in the first half of their 1-1 Absa Premiership draw against Bloemfontein Celtic at Orlando Stadium‚ and conceded Tshepo Rikhotso’s soft 37th-minute opener.

The Bucs rallied drastically in the second half‚ but could only net Luvuyo Memela’s 79th-minute equaliser from a string of chances.

But it was not just Tuesday that Pirates showed this tendency.

Bucs have conceded first‚ whether coming back into those games or not‚ in seven of their last nine matches in all competitions.

They have conceded first‚ then fought back for a result‚ in four of those nine.

The Premiership run-in: How the league title contenders shape up

The Absa Premiership campaign is heading towards to an exciting climax with several teams all with a mathematical chance of winning the league title.
Sport
2 years ago

In league games it is four out of five.

“Facts you cannot dribble. Facts are something that we need to accept‚” Sredojevic conceded.

“As a team that has an approach of bringing the line high‚ risking having an attacking approach towards a game in every single match‚ we were falling behind [conceding].

“It is something that is hard to explain. But‚ having in mind that we do need to enter into the deepest possible analysis‚ we have players who are ready to challenge that particular problem.

“We have a technical team who are ready to address it. And we shall look at the matches ahead of us‚ for that important factor‚ always to be like a light in our head to say‚ ‘Look‚ let us start every game the same way as when we go one goal down’.

All eye will be on Bafana Bafana coach Stuart Baxter on Monday when he names the team to face Libya in a decisive and final Africa Cup of Nations ...
Sport
2 years ago

“Because it looks like something needs to provoke us before we react.

“It’s hard to explain. It is not an intention. We want it to be a different way.

“And those football problems are some of the important factors that we really need to address in the seven matches that we have to the end of the league season.”

Ironically‚ Pirates’ latest tendency in some way seems a reversal of one they displayed in the first half of the season‚ when often they would enjoy strong first-half performances then seemingly become a ball of nerves defending leads in the second.

Such complications point to a complex psyche at the team with an army of coaches on their bench‚ and bloated squad competing for places on the field.

Despite these issues‚ this super-talented Bucs remain firmly in the PSL hunt.

Cape Town City blew the Premier Soccer League title race wide open on Tuesday night, coming from behind, as has become their habit, to up end ...
Sport
2 years ago

They came into Tuesday’s game on the back of two crucial wins in a row – reversing a run of six league and cup games without a victory.

And even their draw against Celtic‚ given it occurred while Mamelodi Sundowns were losing 2-1 away against Cape Town City‚ saw Bucs steal the PSL lead from the Brazilians.

So many teams are struggling for consistency among the front-runners in a bun fight completion to the season. Pirates’ complexities only make them seem to fit into this PSL race leadership nuthouse better.