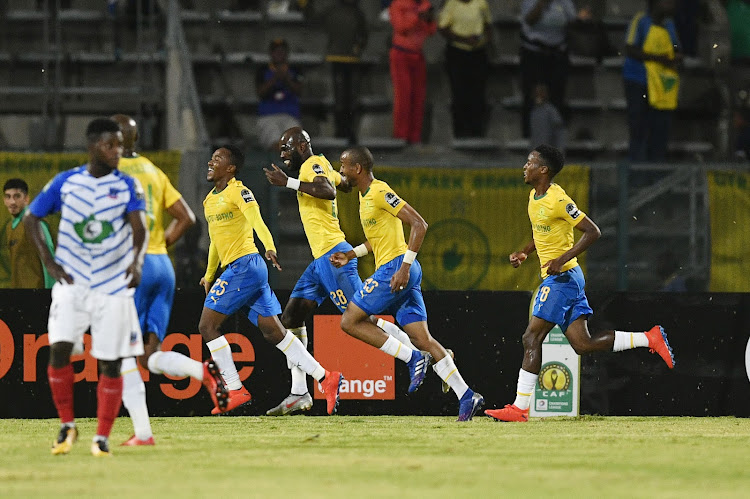 Mamelodi Sundowns reserve their best for the Caf Champions League.

They have flattered to deceive in the Absa Premiership lately with only one win out of their last five matches, a run that also includes three draws and one loss, but they were a different beast in this comprehensive 3-0 demolition of Lobi Stars from Nigeria on Saturday night.

Even though they have been inconsistent in the league recently, they remain in the hunt to defend their title and coach Pitso Mosimane will be satisfied that this win maintained their place at the top of Group A with ten points and one round of matches remaining.

The Brazilians travel to Morocco to take on second placed Wydad Casablanca, who have seven points, in their last group match on Saturday in Rabat needing a draw to safely progress to the quarter-finals stage.

Wydad are in a spot of bother as they lost 2-0 to Asec Mimosas in the other game of the group on Saturday afternoon in Abidjan and this win has taken the Ivorians to seven points on the standings.

Bidvest Wits are slowly but surely pulling themselves out of the league title contention with their 2-0 loss to AmaZulu FC at King Zwelithini Stadium ...
Sport
3 years ago

In front of a near capacity crowd, Sundowns effectively wrapped up this encounter in the first half where they played effective and attacking football that yielded three good goals by Thapelo Morena, Themba Zwane and Lebohang Maboe.

The score may give suggestions that it was a walk in the park but the Brazilians had to step up and manage this game effectively with the experience of the likes of Wayne Arendse, Thapelo Morena, captain Hlompho Kekana, Zwane, Maboe and Gaston Sirino.

With the important league match against Maritzburg United away from home on Tuesday before they travel to Morocco, Mosimane took out Tiyani Mabunda, Anthony Laffor and Gaston Sirino and replaced them with Rivaldo Coetzee, Lyle Lakay and Emiliano Tade in the second half.

The Brazilians took the lead as early as the second minute when defender Morena blasted the ball from close range past hapless Lobi Stars goalkeeper Olufemi Kayode.

A few minutes later, Lobi Stars replied with attack of their own after Ricardo Nacsimento forgot the basics of defending inside the penalty box but goalkeeper Denis Onyango saved his blushes.

Sundowns’ tails were up and after 18 minutes Kekana was allowed to space to breath but his powerful close range shot went wide off the target after Laffor laid the ball on his path with a header as Lobi Stars failed to deal with a cross by Sirino.

On the half hour mark, Kayode produced an excellent diving save to deny Lebohang Maboe’s point blank header as Sundonws continued to look for the second goal.

They got it right later with two goals in as many minutes from Zwane and Maboe as they tore the Lobi Stars defence apart with sleek movements as they tightened their grip on the top spot and also ensured that their fate remains in their hands.