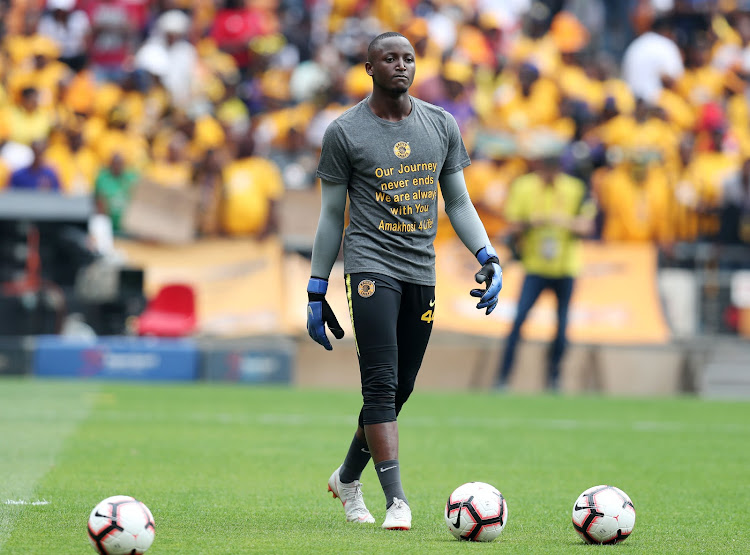 Kaizer Chiefs goalkeeper Bruce Bvuma is not likely to feature for Bafana Bafana in the crunch Africa Cup of Nations (Afcon) qualifier against Libya on March 24 but his inclusion in coach Stuart Baxter's squad was enough to elicit mixed reaction on Monday.

Baxter said he included Bvuma in his squad as cover to Darren Keet and Ronwen Williams‚ who will fight for the No1 jersey‚ and the Chiefs goalie will travel to Tunisia with Bafana as third choice in the pecking order.

But some have questioned the 23-year-old’s inclusion as Bvuma has hardly featured at Chiefs with Virgil Vries and Daniel Akpeyi being preferred ahead of him after a shoulder injury ruled regular No1 Itumeleng Khune out for the remainder of the season in January.

Baxter was prepared for the inevitable interrogation around the keeper’s selection and he offered an explanation before he was asked on Monday.

‘‘This selection of the camp is probably the most difficult I have ever had to make‚” he said.

‘‘The goalkeeper (question) has been one that we have thrown around in every direction.

The inclusion of Bruce Bvuma in the Bafana Bafana squad on Monday was met with disbelief on Twitter as it raised eyebrows given the Kaizer Chiefs ...
Sport
2 years ago

‘‘And that specific role is to be there and to be available‚ and be able to jump in if he is needed.

‘‘Probably he will not be competing for one of those two starting places. So this is a third goalkeeper and we do not want to experiment.

‘‘Without the player on board we can’t do the job. Now the third choice we have made is Bruce Bvuma. The reasons for that I have considered from every angle and Bruce was in our system.

‘‘Bruce came with us to the Cosafa Cup (last year)‚ he was thrown into the deep end against Botswana and he did fantastically well.”

There is no goalkeeper crisis at Kaizer Chiefs‚ Amakhosi coach Ernst Middendorp has said.
Sport
2 years ago

Chiefs coach Ernst Middendorp gave Bvuma a run in a league match against Maritzburg United at FNB Stadium on Saturday and Baxter and the members of his technical team were on hand to watch him play.

Middendorp conceded that he gave him an opportunity to play as the club have a tricky Nedbank Cup quarterfinal against Cape Town Cup and with Akpeyi cup-tied‚ Chiefs needed to give him game time.

‘‘In his club he has also been pushed in a situation where it’s maybe not been an easy situation for him at short notice‚” Baxter said.

‘‘Again‚ he looked rock solid when we watched him‚ myself‚ (assistant coach) Molefi (Ntseki) and (goalkeeper coach) Alex (Heredia) at the weekend. Now I think that for both the game‚ the squad and for the development of the player‚ this is a situation we needed to consider carefully.”

The cynics offered various alternatives that they believe were more deserving of a place in the Bafana squad but Baxter stood his ground said Bvuma had all the characteristics of a great international player.

The time for attractive football‚ and not getting results‚ is over at Kaizer Chiefs‚ Amakhosi coach Ernst Middendorp said as his team stumbled ...
Sport
2 years ago

‘‘There are keepers that are in form but I think that we all need to understand the difference between an in-form player and a potential international player‚” the Briton said.

‘‘There are many players that get recommended by coaches‚ by media‚ by people on the street‚ my wife‚ the dog‚ everybody....... Everybody knows a good player.

‘‘And many of those players are in-form players and I have to look at it from a bigger perspective and say but is this going to serve the national team and the nation both short and long term?”

Bafana must either beat or draw with Libya in the massive final qualifier if they are to secure a ticket to the continental showpiece in June.

Baxter’s charges are in second place in Group E with nine points‚ behind leaders Nigeria‚ who have already qualified.

Libya‚ who must win to take second place in the group behind Nigeria and deny SA qualification‚ were forced to take this game to a neutral venues due to a long-standing FIFA ban over security concerns and must find a neutral venue.

The security situation in Libya is considered dangerous with various rival factions and warlords battling for control over the country’s oil wealth.

South Africa’s elections give the Premier Soccer League a headache

The general election on May 8 is set to play further havoc with the Premier Soccer League’s fixtures with the penultimate round of the campaign now ...
Sport
2 years ago