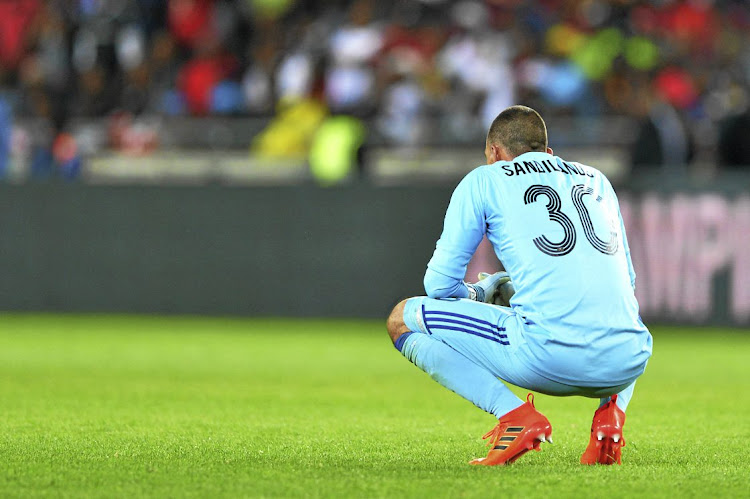 Orlando Pirates goalkeeper Wayne Sandilands has opened up about the disappointment of his exclusion from the Bafana Bafana squad that is to face Libya in a decisive African Nations Cup qualifier in Tunisia on March 24.

Bafana coach Stuart Baxter raised eyebrows this week when he opted for Kaizer Chiefs' young keeper Bruce Bvuma‚ arguing that the 23-year-old was being groomed for the future rather to challenge the more experienced Darren Keet and Ronwen Williams for the No1 jersey.

“I don’t think there’s any player that sits there whose name isn’t called and is happy about it‚” said the 35-year-old Sandilands.

“Obviously I was disappointed and I think every player can say that.

"But for me I’m now focusing on the task at hand (Pirates playing against Horoya SC in the African Champions League in Conakry at the weekend).

“So look‚ I’m just going to keep playing and just keep doing well and you know if I keep doing that, hopefully.”

Sandilands‚ who has eight caps for Bafana‚ has become the No1 goalie at Pirates in recent matches and must have believed that his performances were enough to earn him the nod.

While he admitted his disappointment at missing out from the trip to Sfax‚ Tunisia‚ he insisted that he would never give up hope of donning the national team jersey again.

“I don’t think the passion to play for your country will ever die‚" he said.

"I think right up until the end‚ no matter how old I may be at that point‚ I will always want to strive to be in the national team.

“Like I said‚ I was obviously disappointed because in your head you feel like maybe you can add some value there.

"But coach Stuart (Baxter) is such an experienced coach and he’s got a track record and an excellent one.

“He knows what he’s doing and I know that I’ve got to improve on my game in a lot of areas.

“I've got to look forward to being consistently playing and continue to get better.

“I’m wishing the boys all the best and if they can progress and qualify for the tournament‚ then we continue to go forward, and I'll strive to be in the squad for that (Afcon).

"So step by step we will see what happens.”

Sandilands started his first league game for Pirates in August but after making a howler‚ allowing Highlands Park to score after missing a back pass from former teammate Gladwin Shitolo‚ he was dropped only to make a remarkable comeback in a 1-1 draw in the Soweto derby against Kaizer Chiefs in February.

Since then Sandilands has been in goals for Pirates in league and Caf Champions League matches.

“I just kept trusting in Him and in His plans and I think that gave me the resilience.

"I think I just held onto that and kept being who I am and working as hard I can‚” said Sandilands of his come back from the sidelines.

Kaizer Chiefs goalkeeper Bruce Bvuma is not likely to feature for Bafana Bafana in the crunch African Nations Cup qualifier against Libya on March ...
Sport
2 years ago