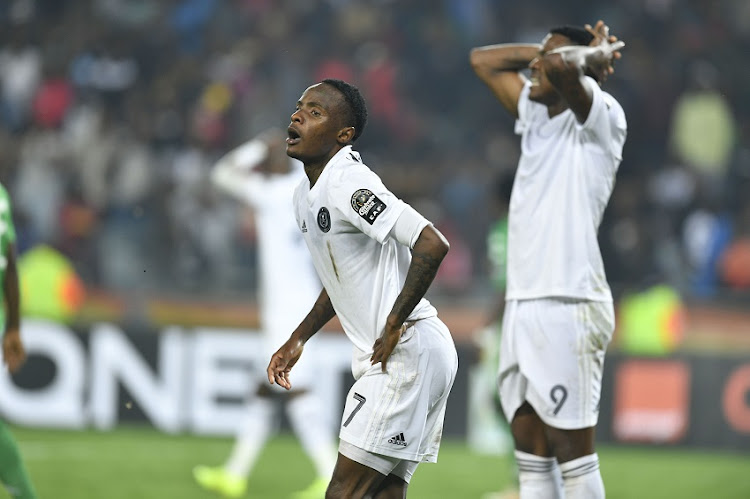 Orlando Pirates’s 2018-19 campaign in the Caf Champions League came to a brutal end in Conakry, Guinea on Saturday night when they suffered a 2-1 loss against Horoya AC.

Horoya progressed to the quarterfinals alongside reigning champions and Group B winners Esperance of Tunisia who beat FC Platinum of Zimbabwe 2-1 in the early match in Harare.

Bucs succumbed to an Abdoulaye Camara’s 56th minute long-range screamer and Boniface Haba’s tap in in an encounter they had all the chances to win, especially in the first half.

Justine Shonga’s 90th minute consolation goal came way too late to make any impact and the loss means Bucs must now put all their efforts to fighting for the Absa Premiership title this season as their trophy drought continues.

Bucs last won a trophy in 2014 but having won the Champions League in 1995 and lost to Al Ahly of Egyptin the 2013 final, there was always hope they could pull off a great result against Horoya, who came to Saturday’s match carrying an impressive 20-match unbeaten run at home.

If Bucs win the league title or finish as runners-up they will be back in the Champions League in August for another attempt to put a second star on their badge.

As expected, the game was wide open in the first 45 minutes as Horoya, who needed a draw to make it to the last 8 for the second time in a row, played their usual attacking game and tried to create chances as early as the first minute when Ocansey Mandela’s shot came off the upright after beating Wayne Sandilands in Bucs goals.

Mandela was in the picture again in the final minute of the first stanza, this time his fierce shot just outside the area brilliantly kept away by Sandilands.

Pirates, though, dominated possession and play in the early exchanges of the game.

Had it not been the suspect officiating of the Ethiopian referee Tessema Weyesa, the Buccaneers could have earned a penalty in the seventh minute when striker Thamsanqa Gabuza was brought down inside the area, only for Weyesa to wave play on.

There was no one to blame though when Luvuyo Memela and Gabuza wasted glorious opportunities to put Bucs in the lead in the 31st and 35th minutes respectively, both inexplicable  shooting over the bar when put through and left  with only Horoya keeper Khadim N’Diaye to beat.

Bucs coach Milutin Sredojevic was forced to introduce striker Augustine Mulenga midway through the first stanza when midfielder Xola Mlambo came off injured as the game got into the boiling point.

Mulenga’s introduction was a blessing in disguise for Bucs as it helped them to stretch the home side more.

Horoya and Esperance joined TP Mazembe (DRC), CS Constantine (Algeria), Al Ahly (Egypt), Simba SC (Tanzania)  and Mamelodi Sundowns who finished second of Group A despite losing 1-0 away to  the 2017 winners Wydad Casablanca in Morocco, who also qualified as the winners of the Group.

The draw for the last 8 of this season’s edition will be conducted in Cairo, Egypt on Wednesday with first leg set for April 26.