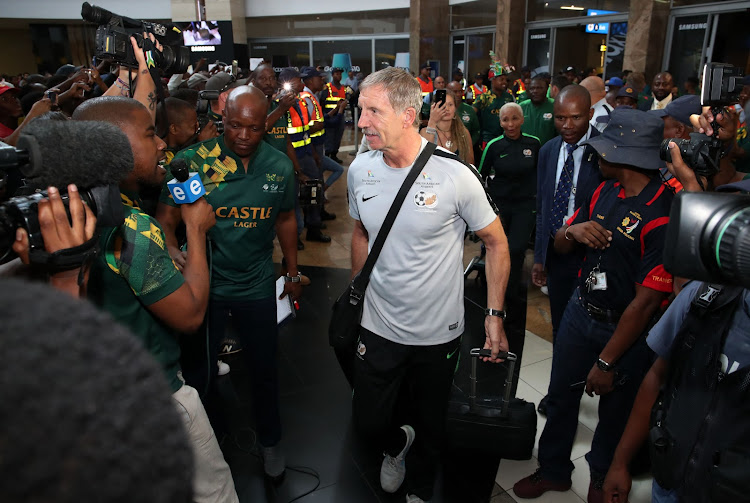 It was a formality‚ of course‚ given the circumstances‚ but Bafana Bafana coach Stuart Baxter has ruled out going anywhere from his job now that his team have beaten Libya to reach the 2019 Africa Cup of Nations (Afcon).

It was not quite an about-turn. But it was close to it.

Because it was Baxter who plainly told a gathering of journalists in February that he would quit if South Africa failed to attain the draw they needed against Libya to reach Egypt 2019‚ and would consider resigning even if they did progress.

On Sunday night Bafana put in a stirring performance to beat the Mediterranean Knights 2-1 in Sfax‚ Tunisia.

And if Baxter’s original threat to perhaps quit even if his team progressed had been made emotionally or out of turn‚ such a sentiment was clearly forgotten when Bafana stepped off the plane Afcon-bound at OR Tambo International Airport on Tuesday.

Clarifying his original statement‚ Baxter said: “Well look‚ what I’ve said [in the past] – it’s the truth and the reality of a coach.

“A coach will do a job as long as he feels that he can do the job.

“People will not tell me‚ ‘You can’t coach Bafana‚ because of blah‚ blah‚ blah’. I will know that for my own reasons.

“It may be for my own motivation‚ for my own health‚ or because I don’t feel that I’m taking the team wherever I want it to go.

“It could be a million things – and at that point I could resign.

“Now‚ at that point as well other people could decide‚ ‘You’re not doing that’.

“So that’s where we were when we went to Tunisia now. I could have been sacked [if Bafana lost]‚ and I could have said‚ ‘Well‚ this is not for me’.

“Now‚ you know that can work in a lot of ways.

“But I think that this squad of players has shown‚ despite all those possibilities‚ that yes we can lose‚ yes we may get hammered‚ yes we may get adulation poured over us if we win 5-0; and they put all that aside and they did the job.

“So in that respect‚ my ambitions for the future really pale. They should take a back seat.”

Bafana finished second in Group E‚ undefeated on 12 points and having conceded just two goals‚ behind winners Nigeria‚ who ended with 13. Libya were third with seven points and Seychelles’ single point was earned from their home draw against South Africa.