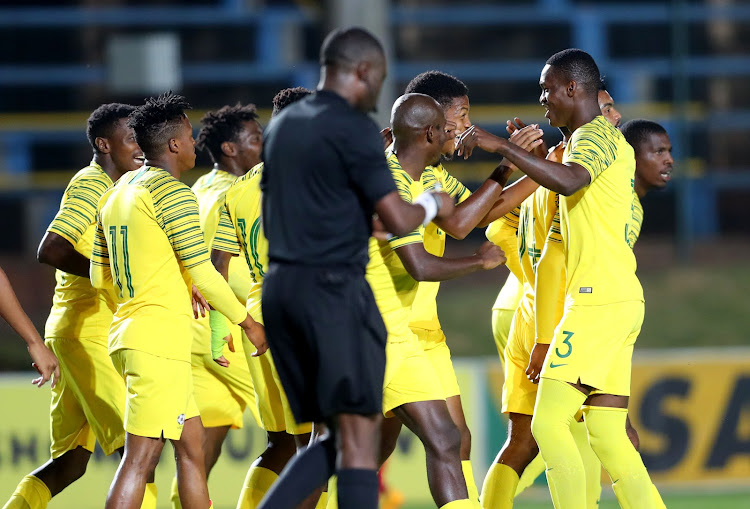 South Africa's Under-23 team produced a 3-0 win against Angola in Tuesday night's Africa Under-23 Cup of Nations qualifier at a chilly, breezy Bidvest Stadium, completing a confident first step towards next year's Tokyo Olympics.

Jamie Webber in 10th minute, Teboho Mokoena in the 70th and Luther Singh in the 93rd produced three unanswered goals as SA strode to a 6-1 aggregate victory.

It is a long way to go to Tokyo - seven more matches. But this U-23 team, in talent, certainly have the look of being capable of making it a second successive, and just third-ever, Olympic qualification for SA.

They have a tough hurdle in the next round, against Zimbabwe, who beat Mozambique 2-0 on aggregate, and if they negotiate that successfully then there is the eight-team African champs in Egypt in November.

The top three finishers there book a place at Tokyo 2020.

South Africa’s Under-23 team took a confident first step towards the 2020 Olympics as they comfortably strolled past Angola 3-1 in Luanda in Friday’s ...
Sport
3 years ago

Angolan football has plunged depths from some success in the 2000s for their senior team, including a remarkable World Cup qualification in 2006. Now the Palancas Negras are ranked 125 in the world.

Their next generation who traveled to SA were somewhat pedestrian. But they worked hard to try to limit aggregate scoreline mushrooming, and the South Africans had to put in a shift for their comfortable win.

SuperSport United made a big contribution to the starting lineup. Webber in a dangerous, pacey front three with Phakamani Mahlabi and Luther Singh, was one of four players from the Pretoria club in the starting lineup. Midfielders Athenkosi Dlala and Mokoena, and left-back Katlego Mohamme were the other three.

SA started out pulling Angola out of shape with some snappy quick-passing.

Monday night football was invented by the Americans for the gridiron game almost 50 years ago and become a social institution.
Sport
3 years ago

They had the lead in the second leg when Webber, collecting the ball 26-metres out, produced a beautifully struck long-range drive that beat goalkeeper Joao de Nascimento.

Perhaps extending the aggregate lead to 4-1 distracted the SA U-23s from their purpose. They lost the crispness in their combinations and there were no more chances until the break.

It was the introduction of the sprightly Kamohelo Mahlatsi, a fifth SuperSport player, on the right that brought the spark back to SA's attack.

The dreadlocked 20-year-old was played down the left, and squared for club team-mate Mokoena to easily slot past De Nascimento.

Then Mahlatsi's combination with Singh saw the latter down the right to bury SA's third.