Baxter determined to manage rising expectations on Bafana ahead of Afcon 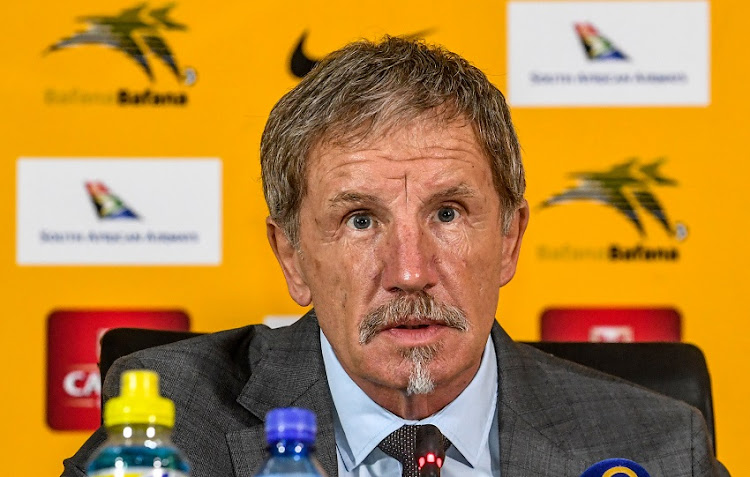 Stuart Baxter was reluctant to put a target on how far he would like Bafana Bafana to progress at the 2019 Africa Cup of Nations‚ but did say that this current squad “should not fear anybody”.

It said something of the expectations raised by a qualification with a disciplined performance beating Libya 2-1 on Sunday in Tunisia that on Bafana’s return Baxter was being asked questions on whether he believes SA can reach the semifinals at Egypt 2019.

The question is a valid one.

Bafana’s long-suffering fans are eager to see more than just a qualification‚ then exit in the first round‚ as SA did under Ephraim “Shakes” Mashaba at their last finals in 2015‚ to see some form of progression from the underachieving national team.

Baxter‚ though‚ was reluctant to add pressure on his players’ shoulders.

“I’ve been part of English national teams with the golden generation of Paul Scholes‚ Steven Gerrard and these people‚ who failed‚” Baxter‚ an England Under-19 coach from 2002 to 2004‚ said.

“And they failed because the expectations were so high‚ and in England we were saying we were so good‚ but we didn’t really get there.

“Let’s go to Egypt and have a really good go at them [the opposition]‚ let them know that SA are not there to be tourists‚ and that we have an identity.

“And if we show the same fierce strength that they showed against Libya‚ I’ll stand by them if they finish fifth‚ sixth‚ seventh or win it.”

Pressed on whether‚ given the expectations raised‚ he felt SA can reach the semifinals‚ Baxter said: “I don’t think that this squad of players should fear anybody.

“I will be saying to them‚ ‘No matter who’s on the other side of the field‚ I think we can beat them’.

“I mean‚ I don’t think Nigeria will be scared of anybody‚ and we just beat them and drew with them.

“The Nigeria coach [Gernot Rohr] texted me a few times in the buildup [to the Libya game] saying‚ jokingly‚ they didn’t want us to be in Egypt. And there’s a reason for that.

“But there will always be expectations and we’ve got to put those to one side and perform.

“I think the players that we’ve got at the moment are doing a good job doing that. And the tighter they get [as a unit]‚ the less they should fear.

“And whether that can take us to a final or a semifinal‚ I don’t know at this moment in time.”

Notoriously fickle Bafana‚ who beat Nigeria 2-0 away and drew 1-1 at home in Group E‚ but also were held to 0-0 by Seychelles away‚ will need to improve their consistency to make an impact at Egypt 2019‚ which runs from June 21 to July 19.