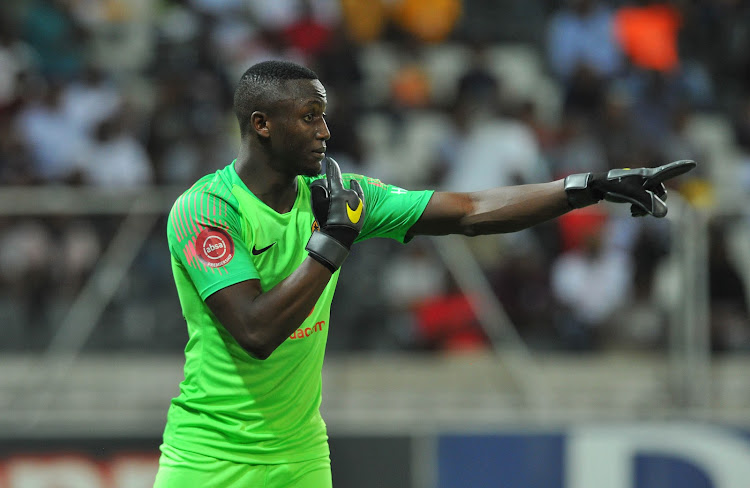 Kazier Chiefs coach Ernst Middendorp has said that Bruce Bvuma needs to keep grounded coming off a heady month as the young goalkeeper faces one of the biggest games of his career in Sunday’s Nedbank Cup quarterfinal against Cape Town City.

Bvuma was included in the Bafana Bafana squad who beat Libya 2-1 in Tunisia on Sunday to reach the 2019 Africa Cup of Nations (Afcon) as a third-choice keeper‚ mostly for the 23-year-old to gain experience.

With Daniel Akpeyi cup-tied‚ Bvuma will be the last line of defence against MTN8 champions City at Mbombela Stadium for an Amakhosi desperate for a victory to keep alive their chance of preventing a fourth season without a trophy.

“I have to chat with him now. You know‚ at this time you get a lot of new friends‚ a lot of new interest from brothers‚ uncles‚ new friends coming to the market‚ and then you get carried away.

“It’s important for him to keep his feet on the ground‚ don’t fly around catching butterflies. Make sure you are solid and concentrating on doing your job.”

Kaizer Chiefs coach Ernst Middendorp has said that Bafana Bafana’s qualification for the African Nations Cup comes as a huge boost not just to the ...
Sport
2 years ago

With Akpeyi’s unavailability in the Nedbank in mind‚ Bvuma played two big league games for Chiefs – a 1-0 home win against Maritzburg United‚ and 1-1 draw against SuperSport United in Nelspruit – to earn valuable game time.

“We had a situation before our derby against Orlando Pirates [the game after Akpeyi’s signing in late January] where they said‚ ‘Now you have to decide coach. Are you taking the risk [on Bvuma]?’‚” Middendorp said.

“I spoke to him and said‚ ‘You will probably be in a good run to be the No 1 here at Chiefs in the future‚ from what I have seen so far’. But knowing that I hadn’t seen him in games‚ I said‚ ‘No’ [for the derby].

“We decided to prepare him in training sessions. And other decisions had to be made.

“Everyone at the club was saying‚ ‘Coach you take a risk bringing him in. If he gets injured against Maritzburg or SuperSport‚ you are in a difficult situation’.

“But OK‚ we have to decide. And so far in preparation for this game‚ I think it was necessary [for Bvuma to play those games].

“I’m very happy he had that game time‚ that he proved himself‚ building his confidence‚ becoming well-prepared for such a game against City.

“I believe it’s sold out. It’s a very interesting one.

“What’s happened in his last four weeks is like a dream for him. And therefore it’s important to mention again and again‚ ‘Stay on your feet‚ don’t be with new friends‚ you will be surprised with what’s coming’.”

Asked to qualify what he meant by Bvuma’s “new friends”‚ Middendorp said: “Your family members who never called you‚ and you don’t even know that you have an uncle in Limpopo‚ you have brothers you last saw when you finished school five years ago‚ and agents post ‘congratulations’ on social media‚ presenting the player as their own client.

“I know the market is crazy. And this now‚ can you imagine‚ all of a sudden you are coming from nowhere into the spotlight. It’s normal that we have to mentor these players.”