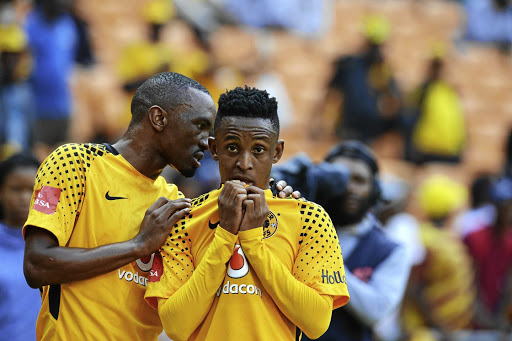 Bernard Parker, left, has told Hendrick Ekstein his future would be better served if he stayed at Kaizer Chiefs. /Lefty Shivambu/Gallo Images

Ekstein had been engaged in prolonged negotiations with the Chiefs management for a contract extension and there seems to be an impasse.

Speculation has been growing about Ekstein's future after the club made him an offer that he felt was inadequate.

Lebese, who left Chiefs in 2017, struggled for game time at Mamelodi Sundowns and is on loan at SuperSport United.

Parker has urged Ekstein to not fall for the allure from outside. "We are definitely praying that he will stay with us and things go well with his contract negotiations," Parker told Sowetan.

Supporters of Bucs and Downs enjoyed the match at Orlando Stadium on Monday.
Sport
2 years ago

"We have seen players such as George leave and things end up not going their way, so I don't want to see that again."

Parker, who signed a one-year contract extension in March, continued: "Since I have been at Chiefs, I have seen players, such as Tefu Mashamaite, Lehlohonolo Majoro and Mandla Masango come and go. When they leave Chiefs players have thought it is greener on the other side but it's not always like that." said Parker

The 28-year-old Ekstein played a starring role when he scored the opener in Amakhosi's 2-0 win over Cape Town City, to progress to the semifinals of the Nedbank Cup in Mbombela on Saturday.

The Glamour Boys will face Chippa United in Port Elizabeth later this month in a last-four clash.

Kaizer Chiefs coach Ernst Middendorp was quick to put the lid on any excessive expectation about his side’s chances of finally ending their trophy ...
Sport
2 years ago

The 33-year-old Parker feels that the gritty Chilli-Boys, who beat the odds to overcome Bidvest Wits, will be a tough challenge for them.

" We have seen them and we know them. Chippa are a team that fights despite not doing well in the league," he said.

"It will be an interesting game and it's just up to us to identify their weaknesses and play according to instructions."

Chiefs will next face Baroka in the league at the FNB Stadium on Saturday.