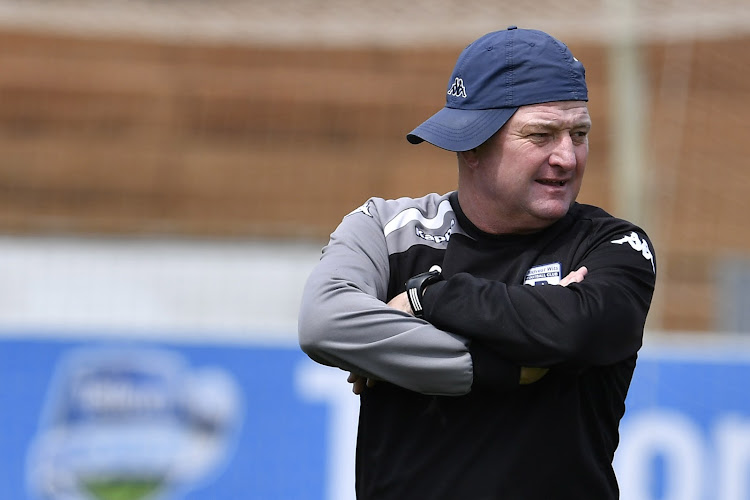 Disappointed in losing the top-of the-table clash 1-0 at home to Orlando Pirates on Saturday‚ Bidvest Wits coach Gavin Hunt believes there are still going to be more twist and turns in the remaining few weeks of the Absa Premiership race.

Hunt even had time to throw in a joke about their circumstances‚ saying maybe his team may do with “a new muthi men” to boost their fortunes in the last five matches.

Although gutted by the end result against the now top of the table Buccaneers‚ Hunt said giving up the challenge on the league is the last thing on his mind after Keagan Ritchie’s last gasp own goal gave Bucs an unlikely three points on Saturday.

“Yeah‚ we are a couple of points behind now‚ still five games to go. Anything can happen‚” said Hunt‚ who saw his team losing their sixth match at home this season.

The Clever Boys have only lost to Highlands Park and AmaZulu on the road this season.

What was more devastating for Hunt’s team in Saturday's loss is that they had the upper hand for most of the match until Ritchie headed into his own net from a free kick that was taken by Luvuyo Memela during referee’s optional time.

A Keagan Ritchie own goal right at the death gave Orlando Pirates one of their undeserved victories this season and perhaps revived their chances of ...
Sport
3 years ago

“Last week we let in a corner‚ penalty and a free kick‚” said Hunt after the match.

“This week is a free kick and an own goal. So there are a lot of those types of goals and there’s a nothing you can do about it.

“You can’t put your finger on those things‚ we’ve just have to keep on working and maybe get a new muthi man or something.”

Hunt believes his side is still very much in the league race.

“As you can see today‚ anything can happen‚ so we will tackle the next one‚” said the Wits coach.

“It was a good performance from us. I thought we were a better team. No problem. There was no danger.

The loss left Wits third on the table and three points off the pace but Hunt feels that could be a blessing in disguise for his team.

“The pressure is off us a little bit‚ so we will have a go now and just play‚” he said.

“But to be fair the goals that have gone in against us in the last couple of weeks there are such freakish goals.”

Hunt had encouraging words for Ritche who hadn’t done much wrong in the match until his last minute sucker punch against his own team.

“It’s very difficult for the boy‚ but there are a lot of better players than him who score own goals like him and they will be a lot more‚” said Hunt.

“It came on top of his head‚ it’s unfortunate you know. I supposed when luck is not with you is not with you. "It could have gone anywhere. And the last couple of weeks we’ve never had anything like that‚ it’s been against us‚ that’s for sure.”

Hunt will hope that their better form away from Milpark will continue on Friday when they visit relegation fighting Chippa United at the Nelson Mandela Bay Stadium.