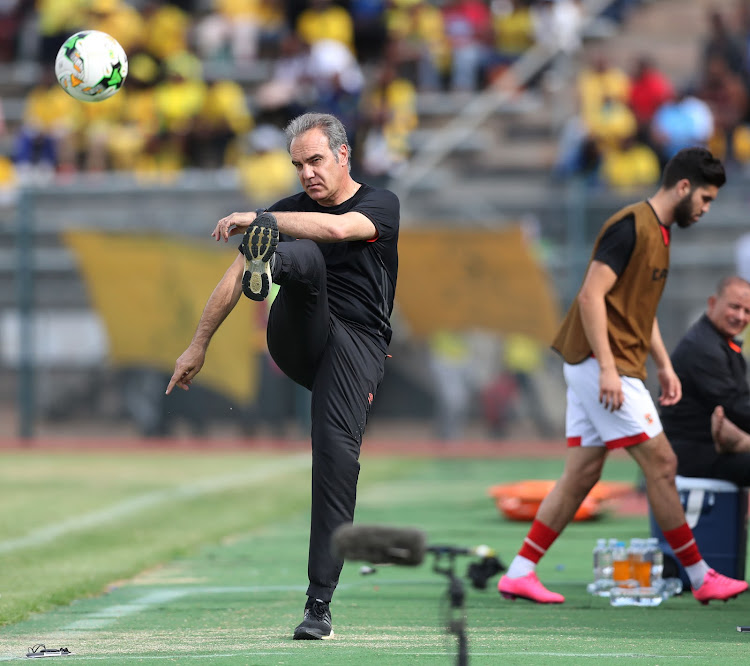 Al Ahly’s five-goal thrashing at the hands of Mamelodi Sundowns was the biggest defeat in some 77 years for the Cairo giants and leaves coach Martin Lasarte’s job hanging by a thread.

The fact that the club have a league game on Wednesday before Saturday’s return leg of their Caf Champions League quarterfinal tie‚ and do not have time to make a change‚ is the only factor that could save Uruguayan coach‚ who has come in for a barrage of criticism since Saturday’s mauling in Atteridgeville.

Among the critics is former Al Ahly defender Wael Gomaa‚ who collected more winners’ medals in his time with the club than any other player‚ and who called it “a shameful defeat for Ahly” and accused their players of performing like “amateurs”.

The 5-0 loss was the heaviest defeat Ahly had suffered in international competition and their worst since Zamalek beat them 6-0 in the 1942 Egyptian Cup final – some eight decades ago.

Ahly lost 5-1 to Mexican club Monterrey in the Club World Cup in Marrakesh‚ Morocco six years ago‚ when Gomaa ironically skippered the team.

Mamelodi Sundowns could not believe their lucky stars that the Al Ahly side that arrived in Atteridgeville was of featherweight proportions.
Sport
2 years ago

In African club competition‚ Ahly have suffered several 3-0 losses previously – including at home to Orlando Pirates in El Gouna in 2013 (their heaviest home defeat in continental club competition) and also last year’s second leg of the Champions League final against Esperance of Tunisia.

Gomaa‚ now an influential TV pundit‚ launched a fierce attack on Lasarte‚ blaming him for Saturday’s new low point for the esteemed club.

“There is no excuse for Lasarte after so many matches [in charge]‚ and the team is not tired‚” said Gomaa.

The ex-Egypt centreback debunked the opinion of many on social media that Ahly have played too many games lately – like Sundowns – as they catch up domestic fixtures that were postponed in the first half the season while they were making their way to the final of the last edition of the Champions League.

“Seven players were rested in the last game [on the Tuesday before Ahly flew to Johannesburg].

“The preparation for the match was not good. I saw the players’ response after each goal and realised that they were not completely in the game.

After the comprehensive 5-0 demolition of Al Ahly in the first leg of the Caf Champions League quarter-final on Saturday‚ humble Mamelodi Sundonwns ...
Sport
2 years ago

“The coach’s substitutions were bad – the entry of [striker] Walid Azaro came too late.

“We used to go into each game knowing the opponents’ strengths and their way of playing.

"He did not look like he had done any homework on Sundowns‚” Gomaa said of Lasarte‚ who previously coached in La Liga with Real Sociedad and who took over Ahly in December.

Gomaa‚ who won over 100 caps for Egypt‚ four Africa Cup of Nations (Afcon) titles and a record number of Champions League titles too‚ also blamed the players.

“The team showed no personality‚ no spirit‚ no leadership. What happened is a shame.

“I faced many South African teams when I played -- they are quick and attacking‚ so you have to deal with them with a strong defence and with a lot of concentration‚ something I did not see against Sundowns.”

Gomaa also did not give his side any chance of forging a remarkable comeback in the return‚ which is on Saturday.

“Given the level and the results of Sundowns‚ I think the return will be very difficult‚ especially with the busy schedule of Ahly and the physical pressure on the players.

“The speed of Sundowns will create problems for Ahly at home and if they are to have any chance of a comeback‚ they cannot afford to concede a goal at home.”

Mamelodi Sundowns coach Pitso Mosimane has urged his players to keep their feet on the ground and stay calm despite the noise of their highly ...
Sport
2 years ago

Former Ahly coach Hossam Al Badari said the only way the Cairo giants could force a sensational comeback was with crowd support – a challenge to authorities to let fans into the stadium.

But Egypt’s military regime has kept a tight lid on football crowds since the Arab spring of 2011‚ where the Al Ahly Ultras were influential in the Tahir Square uprising that led to the overthrow of former president Hosni Mubarak.

In recent years‚ the military have regained power in the country and restricted the size of crowds‚ including a handful for the derby between Ahly and Zamalek a fortnight ago.

The capacity of the stadium in Suez‚ where the game has been moved to‚ is only 20‚000‚ but is unlikely to be anything near as full as fans are prohibited from watching for fear they will agitate politically from the terraces.