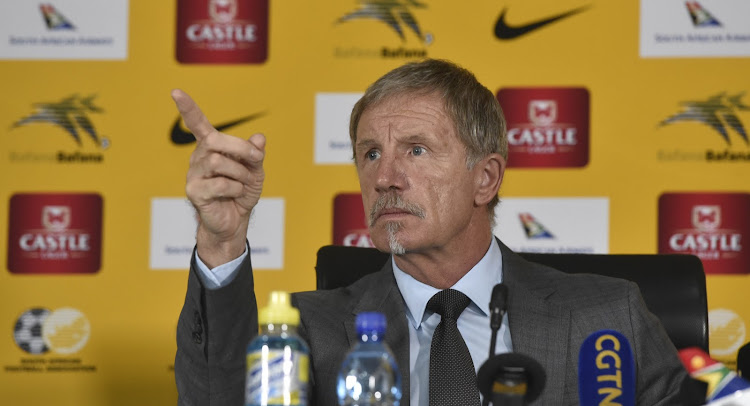 Bafana Bafana head coach Stuart Baxter speaks to the media during his announcement of the squad to take on Libya.
Image: Sydney Mahlangu/ BackpagePix

Stuart Baxter says he would follow his Bafana Bafana players off the pitch if they elected to abandon a game in response to racist abuse during a match.

Bafana star Bongani Zungu recently experienced the ugly spectre of racism in the game when his Amiens teammate Prince Gouano was racially abused during the French club's 0-0 draw against Dijon.

The match did continue and was played to a finish but it once again highlighted the ugly side of the beautiful game.

Baxter‚ who is likely to include Zungu in the Africa Cup of Nations-bound squad in June‚ said he would back his players if they faced a similar situation.

“To start with‚ I cannot comprehend a society that condones that sort of thing‚” said Baxter.

Note to all armchair World Cup selectors: clam up and wait for Thursday

To ‘Hash’ or not to ‘Hash’? Who’s the first-choice allrounder? How about the back-up fast bowler?
Sport
3 years ago

"What football does is polarise and it is very clannish. It is not only racial‚ it’s also homophobic.

“I hate it. This is the human race‚ the only race I want is the race for the Afcon. I want to talk about that but when people are this badly behaved‚ then we have to talk about it.”

Southern African neighbouring country Namibia make up the fourth team pulled from the pot for Group D in last week's draw in Cairo for the competition that runs from June 21 to July 19.

Baxter said the failure to mete out harsh punishment to abusers at stadiums is one of the reasons football the world over has failed to stop the scourge of racism in the game.

The pretenders in the Premier Soccer League title race must forget any hope of stealing away the championship from either holders Mamelodi Sundowns ...
Sport
3 years ago

“I think that punishment has to be greater‚” the Bafana coach said.

“I am not one of those who will say put them against the wall and flog them‚ I don’t think that helps.

“But I certainly think that if someone does that in the name of Chelsea FC‚ for instance‚ and if he sees Chelsea having points taken away or playing behind closed doors‚ it will be a little more self-managed.

“People around the world will be like‚ ‘Hey you shut up! We had points taken from us.’

“The penalties that have been dished out are not great enough and I’ve got no real understanding of the people who do that.

"I can’t say that this is what they are looking to achieve.”

African soccer's ruling body has fired a senior official after he made corruption accusations against the organisation's president in a potential ...
Sport
3 years ago

But the question begs: what would the Bafana players do if they found themselves in this kind of situation?

“I heard another player‚ who played for me in England‚ he said that everybody should walk off the field in solidarity‚" said Baxter.

“I don’t think that I would take the lead on that.

"The player would have to tell me what he wants to do.

"If the majority of my players want to walk off the pitch‚ I would walk with them.”