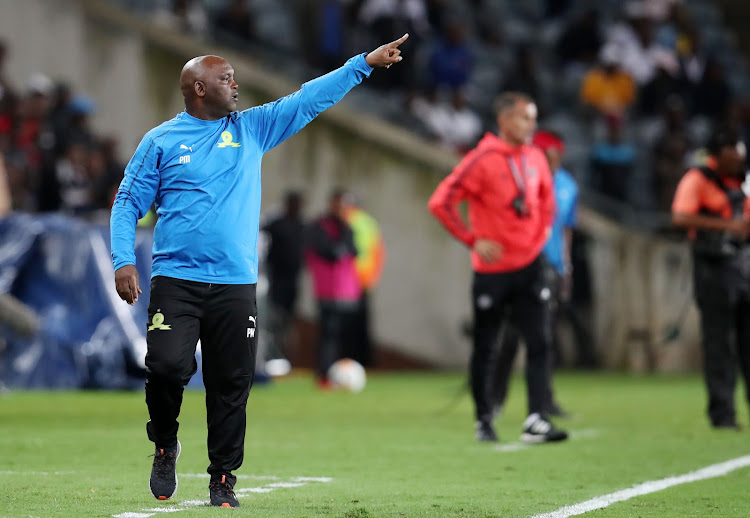 Pitso Mosimane, coach of Mamelodi Sundowns during the Absa Premiership 2018/19 match between Orlando Pirates and Mamelodi Sundowns at the Orlando Stadium, Soweto on the 01 April 2019.
Image: ©Muzi Ntombela/BackpagePix

The pretenders in the Premier Soccer League title race must forget any hope of stealing away the championship from either holders Mamelodi Sundowns or last season’s runners-up Orlando Pirates‚ who Free State Stars coach Nikola Kavazovic says are the real contenders.

And he rates Pitso Mosimane as the best coach in Africa … with Pirates boss Milutin Sredojevich‚ his Serbian compatriot‚ second.

“I can see that those two teams are so much better than others and they are led by the best African coaches. They know what they are doing‚" he said.

“I admire Pitso because he is willing to take huge risks and he always win.

“From my point of view‚ Milutin Sredojevic and Pitso Mosimane are the two best coaches in Africa‚ and they don’t have any competition – maybe [former TP Mazembe and Al Ahly coach] Patrice Carteron is close to them‚ but the rest of us are just people who need to watch and learn.

Irvin Khoza defends PSL legal actions as fair and above board

“So‚ I didn’t view Micho as a countryman‚ no.

"I was like‚ you know when you see your hero and you’re like shy‚ so I was a little bit scared‚” he said of Saturday’s clash between his side and Pirates‚ which ended in a hard fought 2-1 victory for the Bucanneers.

“I am aware of how big a tactician he is‚ and how great a coach and man he is‚ so I felt honoured to play against him‚ and I told him after the game‚ ‘It was my honour to play against you‚ Mr Sredojevich’.”

The gap between Sundowns and Pirates in the standings was too much for the other contenders‚ including Bidvest Wits‚ Cape Town City and SuperSport United‚ to make up even if they were still in with a mathematical chance‚ predicted Kavazovic.

“All due respect to them because they are all teams who have beaten me and I don’t have a right to speak ill of them.

"They are really great teams but if somebody besides Sundowns and Pirates win the title‚ I will apologise in public‚” he added.