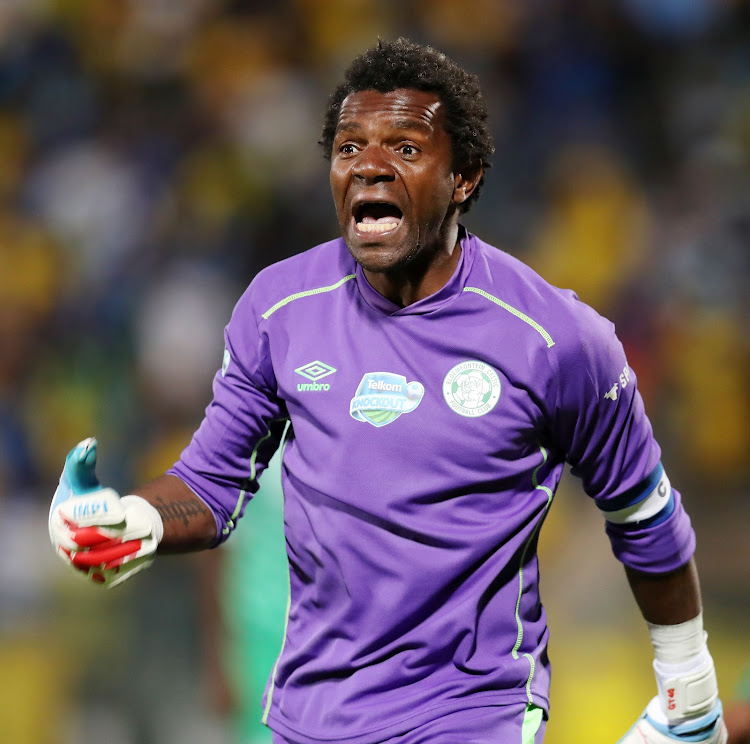 Patrick Tignyemb has left Bloemfontein Celtic after serving the club with distinction over the years.
Image: Muzi Ntombela/BackpagePix

Bloemfontein Celtic chief executive Khumbulani Konco has said that long-time goalkeeper Patrick Tignyemb has been released from his contract because of an abusive rant he had at club officials.

Reports have been that Tignyemb has been given his marching orders because he represented players in talks with chairman Max Tshabalala regarding an outstanding bonus and potential strike at the troubled‚ cash-strapped club.

Konco denied this‚ saying while Cameroonian-born Tignyemb‚ who has played more than 300 games for Celtic in 10 seasons at the club‚ had been in talks on behalf of players‚ he was released because he later returned in his own capacity and verbally abused club officials.

“Early yesterday morning Patrick and [midfielder] Lantshene Phalane came to the office and met the chairman and discussed the issues regarding outstanding bonuses,” Konco said.

“At the end of the meeting they said they would come back to the chairman‚ via the team manager‚ on the decision the players had taken.

An explosive letter that Steve Komphela wrote to his former employers at Bloemfontein Celtic shortly before the exasperated coach finally quit the ...
Sport
3 years ago

“They [later] told the team manager the players were not going to train.

“The team manager informed us. We then wrote to all the players informing them that tomorrow‚ which is today [Tuesday] they should be at training at 9am‚ and failing that the club would take action.

“Those actions were stated in the letter‚ and that we had a right to fine them.”

“Then Patrick came to the office‚ alone‚ around 3pm or 4pm. And then whatever altercation he had at the office‚ that was what resulted in him being terminated‚” Celtic’s chief executive said.

“He cannot say it was because he came to represent the players [on the later occasion]. He came alone.

“And the things that he was saying‚ he was talking about himself. That the club could not do anything to him. He was swearing‚ abusive‚ obstructive.

Stellenbosch FC do not foresee wholesale changes to their first team for next season in the Premier Soccer League (PSL)‚ although the prospect of ...
Sport
3 years ago

“Definitely all of those things were against what is written in his contract. So immediately when he did that we took a step‚ and said ‘OK‚ so if you are breaking your contract deliberately like that‚ then we will terminate you’.”

Konco was asked if‚ given the length of Tignyemb’s service‚ Celtic might have considered lesser measures than a termination‚ such as disciplinary action.

“Listen‚ if you were there‚ you would have called the police. That’s how bad it was‚” he said.

Celtic have already suffered player strikes in the 2018-19 season where financially-troubled Tshabalala has had the club up for sale‚ but been unable to secure a suitable buyer.

Konco said the latest issue that Tignyemb and Phalane were representing the players on was over a win bonus for Celtic’s 1-0 Absa Premiership victory against Kaizer Chiefs on April 27.

“The bonuses will be paid‚” Konco said.

“The bonus issue it not a contractual issue. Bonuses are paid at the discretion of the chairman.

Darren Keet is supposed to be playing his last game for Bidvest Wits on Saturday as his contract comes to an end but the future of the international ...
Sport
3 years ago

“The players were demanding that the bonus be paid now. Normally the chairman pays bonuses when he has the funds to.”

TimesLIVE wanted to ask Tignyemb’s side of the story. Called on his cellphone‚ the goalkeeper asked: “Yes‚ who’s this?”

Told that it was TimesLIVE and SowetanLIVE calling‚ he hung up. Attempts to call him back were initially unsuccessful as his cellphone had been switched off.

Later he was reached again‚ and said he was “busy with supporters”‚ and asked to be called back in five minutes. He did not answer when called back.

Konco said Celtic’s players had turned out for training on Tuesday morning‚ but that he was not sure if a strike would still materialise.