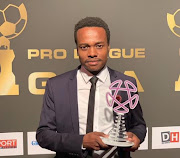 Image: Percy Tau via Twitter Bafana Bafana star forward was voted the best player in the second division in Belgium.

Percy Tau has been honoured with another accolade after sweeping to the Player of the Season prize in the Belgian second-tier following his outstanding campaign for Royal Union St-Gillloise.

And his exploits this season have not gone unnoticed at parent club Brighton & Hove Albion‚ where fans sang his name at their recent English Premier League clash against Arsenal.

But it still remains to be seen whether Tau will get the required work permit to begin life in England next season‚ though a strong Africa Cup of Nations in Egypt for Bafana Bafana in June and July will certainly aid that quest.

Tau‚ the Premier Soccer League's Player of the Season in 2017-18‚ was the overwhelming winner of the player prize in his Belgian league‚ claiming 228 votes from his fellow professionals‚ versus Nikola Storm (89) and Faïz Selemani (84)‚ the two other nominated players.

It is the second season in a row that he has been voted the best player in his league after he picked up the Absa Premiership prize in his final season with Mamelodi Sundowns in 2017-18.

The question now is what will the future hold for him‚ but after 10 league goals and 12 assists this campaign‚ he has proven his ability to settle into European life with relative ease‚ albeit in the second-tier.

Certainly‚ Brighton fans will be hopeful he can play for them next season‚ as they showed support at Sunday’s 1-1 draw with Arsenal.

Should Tau fail in his bid to get a work permit‚ it seems inevitable that Brighton will seek to cash in on the 25-year-old and could make quite a profit after his season in Belgium.

But the Bafana star will hope his next move‚ if it is to be away from Brighton and England‚ will be to one of Europe’s other top leagues where work permit criteria are far less strict.

France would be a strong option‚ and there would be little adjustment needed with culture in the country similar to that of Belgium.

South African players also have a growing reputation in Ligue 1 after fine seasons for Lebo Mothiba and Lebohang Phiri‚ while there is also respect for Bongani Zungu and Keagan Dolly despite their injury-plagued campaigns.