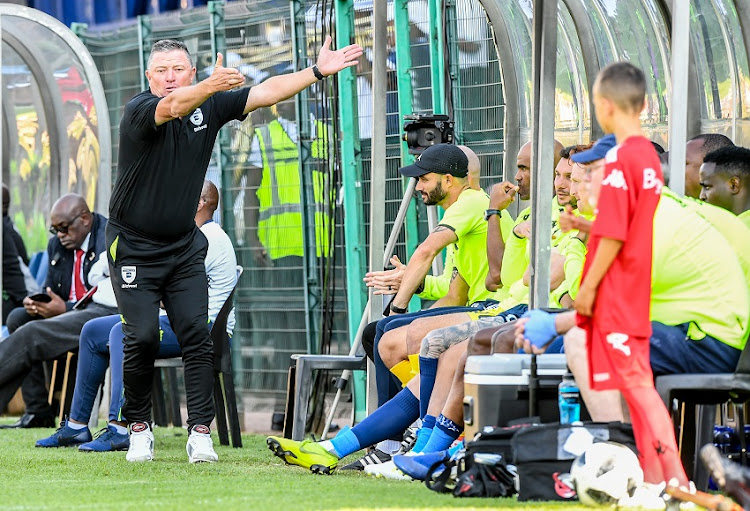 Gavin Hunt (coach) of Wits during the Absa Premiership match between Bidvest Wits and Baroka FC at Bidvest Stadium on May 04, 2019 in Johannesburg, South Africa.
Image: Sydney Seshibedi/Gallo Images

South African football has no reason to delay introducing the VAR (video assistant refereeing) after a spate of bad decisions by match officials were witnessed in the closing 2018-19 PSL season‚ Bidvest Wits coach Gavin Hunt has said.

The Clever Boys were on the receiving end of bad decisions in their 1-1 drawn Absa Premiership match against SuperSport United a week ago when referee Phelelani Ndaba disallowed a legitimate goal that could have kept Wits in the league race had they won.

Ndaba has since been suspended for three months by Safa‚ but Hunt says SA football needs more than the suspension of the officials to improve.

Hunt is advocating for the implementation of the VAR in the PSL‚ a system that is already in operation in some European leagues.

“I think it’s all over the world (referees making mistakes). The game is so fast now‚ so it’s very difficult to make decisions‚” said Hunt.

“That’s why you need this VAR and that type of stuff... it helps you. It would have helped us last week (against SuperSport).”

Hunt admitted that he's a big fan of VAR.

He said it helps the referees make the correct calls and review their decisions in situations where they are not sure whether the ball crossed the line.

“I’m a big fan of VAR. I think it saves careers‚ it saves jobs and it gets the right decision.

"So‚ either way it is going to help‚” said the Wits coach.

“I think all the games are moving (towards the review systems)… cricket‚ rugby .....Soccer has been the last one to move forward with that type of thing.

“We need it. I think the game is so fast and so quick now that you need decisions to be made correctly.

“And sometimes it’s going to go against you because you’ll score and you think you’ve scored a legitimate goal but there was an offside.

"And sometimes it’s going to go for you‚ like last week.”

Hunt said he’s got no comment on whether the SA referees are good or bad.

"There are a lot of ex-players who complain that they got no jobs‚ they’ve got no life‚ why don’t they become the referees.

"I mean there’s a career there.”

Wits are now out of the league race and Hunt partially put the blame on the wrong decisions made by referees against them in certain games.

“We’ve felt the brunt of it (bad refereeing) this year for sure‚” he said.

“I mean some of the free kicks turned to goals when they shouldn’t have been. That’s disappointing but hopefully it evens itself out.”