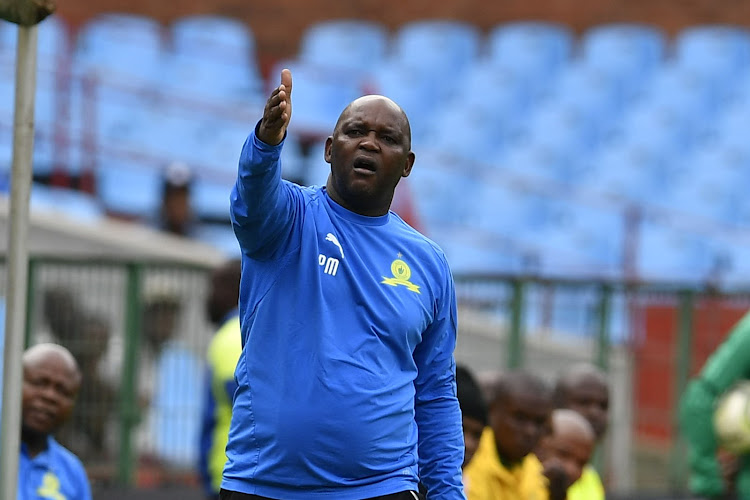 Gatvol Mamelodi Sundowns coach Pitso Mosimane will not celebrate if his charges win the league title on Saturday.

Sundowns are perched at the top of the premiership standings after beating Golden Arrows 2-0 win at Loftus Stadium on Tuesday night but even though the Brazilians‚ who lead second-placed Orlando Pirates by two points‚ could win the league title on the final day of the season on Saturday‚ Mosimane is seething.

The Sundowns coach's mood has been soured by news that the Premier Soccer League (PSL) is appealing against the ruling by its Disciplinary Committee regarding the Pretoria club's fielding of ineligible player Wayne Arendse in a game against BidVest Wits in October last year.

In a move that could have consequences on the destiny of the league title‚ the PSL wants the original monetary fine imposed on Sundowns and Arendse last week to substituted by an awarding of a 3-0 win to Wits and the player to be suspended for two matches.

“This season is not the one that I am going to run around with the trophy and get excited about if we win because I don’t understand what is happening.

"Really‚ what is happening?” asked an unimpressed Mosimane.

The Premier Soccer League (PSL) have appealed the decision of their own disciplinary committee (DC) in respect of the sanction against Mamelodi ...
Sport
3 years ago

“It is unbelievable that there is one round of matches left in the season and we are still talking about this thing.

"I have said my part and I am now focusing on the pitch because I don’t want to be the coach who is always fighting with people.

"I have the last the game (away to Free State Stars) to prepare for."

Sundowns and Arendse were both fined R250‚000 each‚ with half suspended‚ for the club having fielded the player in a 1-1 Absa Premiership draw against Wits at Loftus Versfeld in October‚ when he had not been named in the original match squad of 18.

This was in contravention of PSL regulations. Downs were not deducted a point.

No points were awarded to Wits by the DC ruling.

This is one of the main points the PSL appeal is seeking to have overturned in the arbitration‚ asking that a 3-0 victory be awarded to Wits.

Mosimane reiterated that his outspokenness on the Arendse issue has created a lot of enemies for him.

“I have created a lot of enemies and I don’t need this‚" he said.

"I have already told you how I feel about this season.

"Last season I said it was one of those but this season I don’t know.

"If Sundowns wins the league I will be happy for the boys and the fans who sing on top of their voices.

Stellenbosch did not produce the grandstand finish they had hoped for on the last day of the National First Division season but a goalless draw at ...
Sport
3 years ago

"I told the players to try their best and win against Free State Stars and we will see what happens because it is beyond our control.

"I am a football coach‚ so I must stick to the pitch now.”