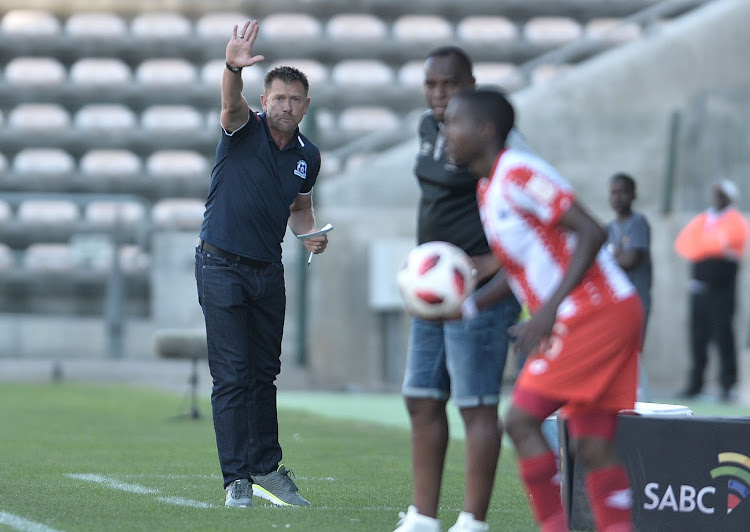 Maritzburg United coach Eric Tinkler has told his players to forget about making holiday plans as the club prepares to battle the relegation quicksand.

Tinkler achieved his objective as Maritzburg survived the axe by the narrowest of margins on a dramatic final day at the weekend and ended second from bottom.

Maritzburg now have a second bite of the cherry to retain their lucrative Absa Premiership status as they take part in the three-team mini-league promotion playoffs.

"Players are now staying for another month basically. Usually they would be going away for off season‚” said Tinkler.

Eric Tinkler fears that his Maritzburg United players could lower their guard and underestimate their opponents from the National First Division when ...
Sport
3 years ago

While other players pack their bags and switch into holiday mode following the conclusion of the season a few days ago‚ Maritzburg players face four decisive matches in the promotion playoffs that will determine their destiny.

“But I think I have prepared them mentally for this already‚" Tinkler said.

"It is not something that comes as a surprise for them.

“I made them aware that we have potential of going to the playoffs and nobody should make plans for holidays and families.

“I told them that they must be prepared for another three weeks of hard work that is in front of us.”

Both Royal Eagles and Tshakhuma Tsha Madzivhandila will be licking their lips in anticipation ahead of the start of the Premier Soccer League’s ...
Sport
3 years ago

The 48-year-old coach said he has prepared the players mentally and is confident his team will be up for the challenge that lies ahead.

Maritzburg will face off against the two teams that finished second and third respectively in the National First Division (NFD) – Royal Eagles and Tshakhuma Tsha Madzivhandila (TTM).

The playoffs will be played from Wednesday to June 1.

Maritzburg start their playoff campaign at home against Royal Eagles on Sunday May 19.

They then travel to Venda three days later to face TTM at the feared Thohoyandou Stadium and Tinkler emphasised the need for his team to start well.

“It is important especially at our home games‚" he said.

"It is very important to win our home games and then we need to go and collect something away and we have shown before that we can do that.

"Difficult journeys because it is long trip obviously from Pitermaritzburg to come here (Polokwane).

"It is another three hours from here (Polokwane) to Venda but the players have done it before so they know what is coming.”