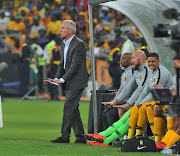 Beleaguered Kaizer Chiefs coach Ernst Middendorp decided against tendering his resignation in the aftermath of the club’s embarrassing defeat to lower tier TS Galaxy in the final of the Nedbank Cup on Saturday and will instead wait for management to decide his fate in the coming days.

Middendorp‚ who joined Chiefs in December following the departure of Giovanni Solinas‚ said he would meet management and his future would be on the agenda.

Chiefs fans froze in their seats in stunned silence after upstart Zakhele Lepasa scored a last-gasp penalty to hand the minnows from Mpumalanga one of the most shocking results in South African football at a packed Moses Mabhida Stadium in Durbvan on Saturday night.

The result confirmed Chiefs’ rapid plunge into mediocrity as besides losing to the lower tier side in a final they were favoured to win‚ Amakhosi also finished the season outside of the top eight on the standings.

The stunning result came just days after Middendorp was asked if he would resign if Chiefs‚ who have not won a trophy in four years‚ lost a major cup final against a club campaigning a division below them.

But Galaxy clearly missed that memo and they confirmed the German trainer’s worst nightmare when they deservedly beat their more illustrious counterparts in a game coach Dan Malesela’s upstarts dominated.

Middendorp admitted that he was embarrassed by a result that sent shock waves across the country.

“It is definitely shocking‚ embarrassing and disappointing …… I just can repeat it‚” he said.

“I definitely cannot sit here and make a good performance out of it.

“I have said it before and I will say it now‚ it is definitely a shocking and very disappointing outcome not only (in the Nedbank Cup on Saturday) but from the end of the season in general.”