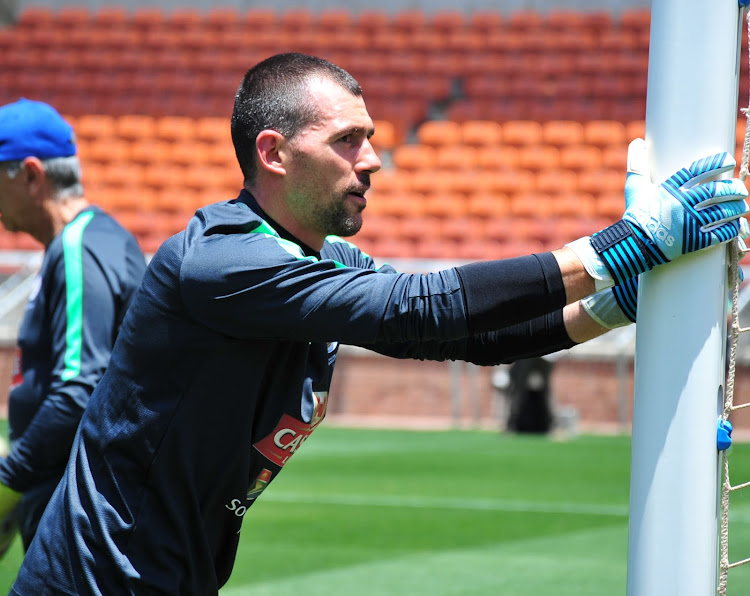 Wayne Sandilands‚ ever the diplomat‚ openly admits that he was “gutted” not to have been included in the Bafana Bafana provisional squad for the Africa Cup of Nations (Afcon).

Bafana coach Stuart Baxter again snubbed dependable Sandilands – who forced his way back from the cold into Orlando Pirates’ starting lineup in February and then could not be dislodged from it – naming a 30-man provisional Afcon squad on Tuesday.

Baxter’s frontline two keepers in the absence of injured Bafana No 1 Itumeleng Khune – Darren Keet and Ronwen Williams – were not a surprise.

However the selection again of Kaizer Chiefs’ inexperienced Bruce Bvuma – who was taken to South Africa’s 2-1 final Afcon qualifying win against Libya in Tunisia in April mostly to gain experience – seems risky for a tournament format.

“I can’t deny the fact that I’ve been disappointed. Well‚ you know‚ like‚ really disappointed‚” Sandilands admitted to TimesLIVE on Wednesday.

“I think I was pretty excited. But that’s life right? Stuart has his own reasons and he knows what he needs and what he feels is best.”

Stranger than Sandilands’s omission from the Johannesburg senior Bafana training camp in early June was that he also was not included in a shadow SA Under-23 team for the simultaneous Cosafa Cup in Durban.

Baxter said‚ announcing his Bafana squad‚ that Mamelodi Sundowns’ third-choice Reyaad Pieterse (27) – who played five league and cup games this past season – is being touted for game time at Cosafa to potentially come in as a ready replacement if any of the senior three keepers becomes injured.

Stuart Baxter has yet to name his final Bafana Bafana squad for the 2019 Africa Cup of Nations and that means the door remains open for anyone to ...
Sport
3 years ago

Sandilands‚ with his experience – he came on for Denis Onyango in the 28th minute and did not put a foot wrong for winners Sundowns in the second leg of the 2016 Caf Champions League final in Egypt against Zamalek – and form could even push for a first-team place at the Afcon.

Known for his sense of decency‚ the Pirates keeper would never criticise a compatriot.

But purely from a goalkeeping perspective‚ taking an inexperienced third-choice to Egypt surely seems risky.

At the Afcon Bafana are guaranteed three group games‚ and depending how far they go‚ as many as seven – so the third-choice goalkeeper becomes a lot more important.

Stuart Baxter decided to leave Itumeleng Khune out of Bafana Bafana's provisional squad for the African Nations Cup after realising that the ...
Sport
3 years ago

“Look‚ I agree fully with you but I guess only with hindsight will you be able to know for sure‚” Sandilands said.

“Maybe Stuart sees something‚ and if any of the keepers steps on a pitch and does a fantastic job everybody will laud Stuart for his vision and ability to see talent.

“But obviously if it goes wrong then people can say it was the wrong decision. So I guess only time will tell.

“I‚ as a person‚ will never knock another keeper or say they shouldn’t be there. Because obviously I’m not perfect in any regard.

“I think there are pros and cons into the keeper selection that Stuart has taken. If the question is Bruce‚ I think maybe it is risky. But only time will tell if that was a good risk‚ and a calculated one or not.

The sight of Percy Tau in a leg-brace this week will have sent shivers down the spine of many Bafana Bafana fans as he will be a key component of the ...
Sport
3 years ago

“I have the utmost respect for all the goalkeepers who are there.

“Obviously just personally‚ I won’t shy away from that‚ I am disappointed‚ and it will definitely take some time to get over it – that’s how deep it is.”