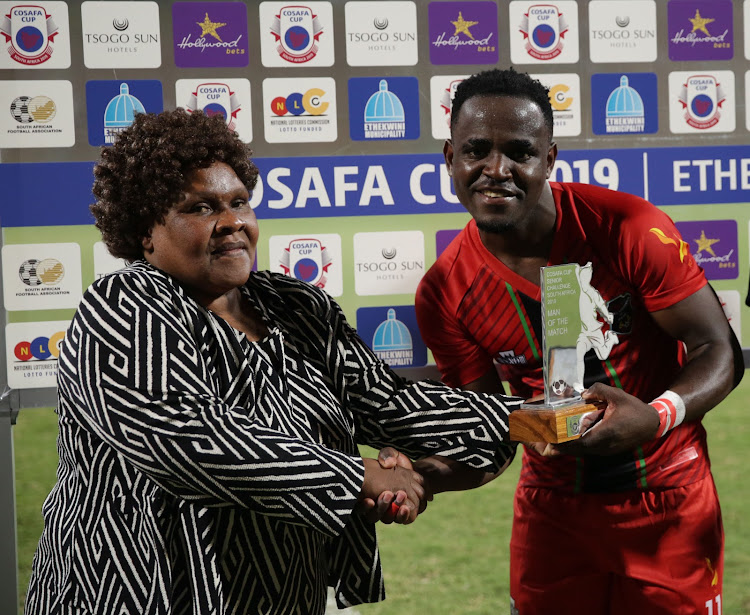 Bidvest Wits and Malawi forward Gabadinho Mhango receives his man of the match award after a sterling display in the Cosafa Cup match against Seychelles at King Zwelithini Stadium in Durban on May 26 2019.
Image: Samuel Shivambu/BackpagePix

Gabadinho Mhango says the quality of the Premier Soccer League (PSL) makes the lure of Europe less inviting as the Bidvest Wits striker celebrates signing a one-year extension with The Clever Boys for next season.

The Malawi international striker is coming off a mixed campaign for Wits‚ during which time he made only 13 appearances in all domestic competitions‚ scoring three goals.

But the 26-year-old says he is already looking forward to the new campaign and is pleased to stay at Wits for another year at least.

“It’s been a great experience for me to play in the PSL‚” he tells TimesLIVE.

"Maybe there is no need for me to go to Europe because it is the same football … there is a lot of competition [in the PSL] and there are great players that you are playing alongside.”

Maritzburg United can ensure that they finish top of the Premier Soccer League`s post-season promotion-relegation playoffs and keep their top-flight ...
Sport
2 years ago

He admits disappointment at the way Wits faded in the last few months of the league season‚ but says there is no reason why they can’t challenge for top honours again in the new campaign.

“The previous season we lost the league ourselves. This season we need to fire and see ourselves to the championship.”

He adds he is looking forward to competing in African club competition‚ describing it as a “good challenge”.

Mhango can be frustrating as a player but showed his quality for Malawi as they brushed aside Seychelles in their Cosafa Cup opener on Sunday.

He scored the opening goal from a free-kick and set up the next two for teammates Richard Mbulu and Gerald Phiri Jnr.

Malawi have ditched many of their older heads and are starting afresh under new coach Meke Mwase‚ a former Jomo Cosmos player.

“It is a new team. Most of the guys I had never played with before‚ so it was great to start with a win‚” says Mhango‚ who was watched from the stands by Wits coach Gavin Hunt.

New Baroka FC striker Richard Mbulu says he will complete a dream of his when he features in the Premier Soccer League in the 2019/20 season‚ having ...
Sport
2 years ago

The Cosafa Cup will limit Mhango’s off-season‚ especially if Malawi make the knockout stages of the tournament‚ but he says he is not bothered.

“I don’t have time to rest‚ I’ll rest when I retire! I still have energy and when there is an opportunity like this‚ I have to take it.

“When the coach asked me to come and play I did not hesitate. This is what I love to do.”