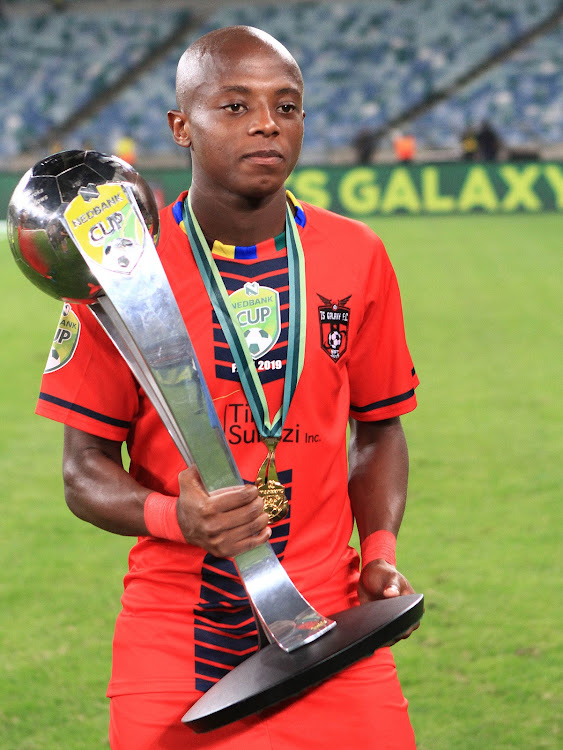 TS Galaxy FC striker won the Nedbank Cup, is in line to make his Bafana Bafana debut in the Cosafa Cup and tipped to return to his parent club Orlando Pirates.
Image: Anesh Debiky/Gallo Images

Nedbank Cup player of the tournament Zakhele Lepasa says his family is grateful for the riches he won in prize money and revealed how he is enjoying his new-found fame.

The 22-year-old TS Galaxy striker shot to celebrity status two weeks ago when he scored the lone goal that sunk the mighty Kaizer Chiefs in the Nedbank Cup final in Durban.

The Soweto-born star pocketed a staggering R150‚000 at the Premier Soccer League (PSL) awards ceremony in Durban last week where he was named the best player in the R7m knockout tournament.

“It’s been good for me (winning the prize money) of course and for my family.

"I think I can tell you they (my family) are probably looking forward to seeing the money come in‚” said Lepasa‚ who is on loan at National First Division (NFD) rookies TS Galaxy from Orlando Pirates.

Lepasa was speaking from Durban where he is in camp with the Bafana Bafana squad that will take part in the Cosafa Cup.

Lepasa said his star continues to rise since winning the Nedbank Cup and getting the Bafana call-up but he added that he would not allow it go to his head.

“Now I realise that a lot of people in the streets know me even if I try and hide myself people do still recognise me‚” said Lepasa.

Lepasa has already had two training sessions with the national team at Princess Magogo Stadium in the Durban township of Kwa-Mashu and described the atmosphere in camp as “chilled.”

TS Galaxy's man of the moment Zakhele Lepasa will wait for Orlando Pirates to decide on his future after a glorious weekend that saw him win a major ...
Sport
2 years ago

“The guys are welcoming. (The training sessions) are quite better than I thought they would be.”

Bafana kick off their Cosafa Cup campaign at the quarterfinal stage with a clash against neighbours Botswana on Saturday June 1.

Lepasa has shown his deadly nature in front of goals during the Nedbank Cup and believes he can solve the national team’s scoring problems if given a chance.

“I think I have hunger for goals so I think that is also what is missing in the team‚” said Lepasa.

“I think I have a lot of qualities but first I have to try and play with the team and gel into the international stage and try to score goals.

"If I could get a chance I will score. The most important thing is that the team must win and I should play a part when that happens.”