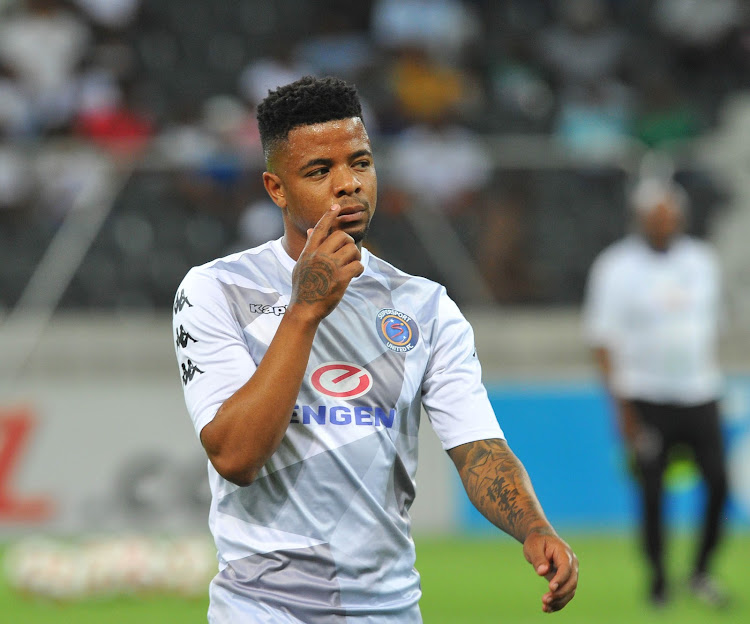 George Lebese's loan-spell at SuperSport United has ended and it remains to be seen if he will return to his club Mamelodi Sundowns or move to another side as he bids for game time.
Image: Sydney Mahlangu/ BackpagePix

SuperSport United have sent George Lebese back to Mamelodi Sundowns after deciding against signing the on-loan midfielder on a permanent deal.

Lebese only managed seven league appearances at United and the club's director of football Stan Matthews confirmed to TimesLIVE that they have decided against pursuing the player.

“We are not going to pursue George‚" said Matthews.

"I don’t think he really did enough during his loan spell with us in terms of assisting goals.

“His attitude was great while he was with us and I felt sorry for him because he came to us undercooked and it was hard really to judge him fully.

"The first few weeks of his arrival was about getting him right and on his pay package‚ and what the move entailed. Unfortunately we won’t be taking Lebese.”

Premier Soccer League (PSL) chairman Irvin Khoza has said it is “unfair” and “upsetting” that he gets accused of influencing the PSL’s prosecutorial ...
Sport
1 year ago

Lebese arrived at United in the middle of last season and while he was not able to convince the Pretoria side‚ Matthews conceded that he conducted himself in a professional manner during his short stay.

With Lebese out of their radar‚ Matthews said they have set their sights firmly on Lucky Mohomi and Aubrey Ngoma.

The two players have struggled for game time at Sundowns since they joined from relegated Free State Stars and Cape Town City respectively.

“We will try and see if we can’t sign Lucky Mohomi or Aubrey Ngoma from Sundowns‚" he said.

"If it doesn’t happen we have a couple of back-up options."

Matthews told TimesLIVE his relationship with Pretoria neighbours Sundowns remains very strong even after rejecting the Brazilians' multi-million rand offer for the signatures of emerging midfielders Teboho Mokoena and Aubrey Modiba this week.

The free-spending Brazilians put millions of rand on the table and also offered a player as a sweetener to United as part of the proposal.

But Matthews said he told Sundowns officials that his two most prized assets were not for sale to any local team.

"We have a great relationship with Sundowns‚ the president Patrice Motsepe and coach Pitso Mosimane‚" Matthews said.

"I feel comfortable about approaching them about any player and I have approached them for Lucky Mohomi on a straight deal and for Aubrey Ngoma.

Banyana Banyana's Thembi Kgatlana gets all the love after historic goal

Kgatlana became a household name overnight, with many praising her.
Sport
1 year ago

“We have rejected Sundowns’ bid for Teboho Mokoena and Aubrey Modiba but it does not mean that every time they come knocking on my door we can give them what they want.

“There have been players in the past like Jeremy Brockie‚ Hlompho Kekana‚ Tebogo Langerman and Anthony Laffor who have joined them from us.

"But I have conveyed to them that unfortunately this time we are not entertaining any offers for either of Modiba and Mokoena locally.”