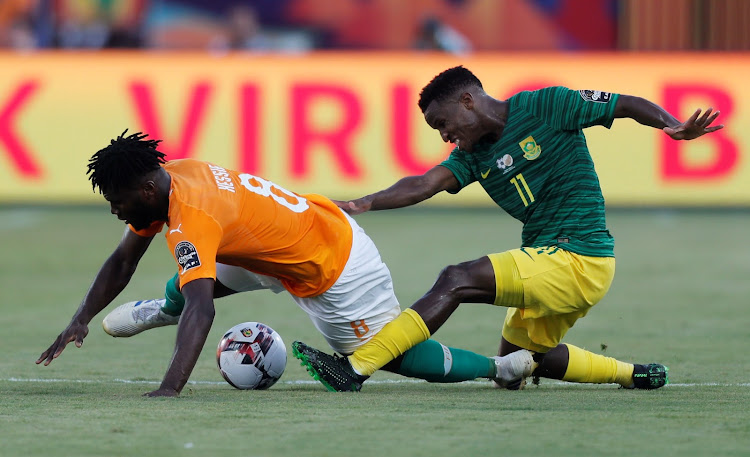 Themba Zwane will hope to be far less of a lone warrior in attack for Bafana Bafana in their must-win Africa Cup of Nations (Afcon) Group D match-up against Namibia at Cairo's Al Salam Stadium on Friday night than he was in their opening defeat to Ivory Coast.

Zwane carried his Caf Champions League form‚ where he was one of the best wingers in the 2018-19 competition and hugely influential in Mamelodi Sundowns reaching the semifinals‚ into the Afcon finals.

Unfortunately Zwane was too often a lone figure displaying his range of skills‚ as Bafana‚ well-structured in defence‚ faltered in attack.

"We felt bad. We knew that a win in the first game could be a positive thing‚" Zwane said at Bafana's team hotel next to Cairo International Airport on Thursday.

"But we've told ourselves that we need to focus on the next game and there needs to be a big improvement.

South African Football Association (Safa) president Danny Jordaan did not mince his words in Egypt‚ saying simply he was "not impressed" with the ...
Sport
2 years ago

"I think we were not sharp enough‚ our movement was slow.

"I thought even with a third man running‚ we weren't doing that. We weren't creating enough chances.

"Those are the things we need to work on. This week we've been analysing the Namibia game‚ and for me I think we're ready for it."

Zwane was the joint second-top scorer in the 2018-19 Champions League on six goals along with Rwandan Meddie Kagere of Tanzanian club SC Simba‚ and one behind Moataz Al-Mehdi of Libya's Al-Nasr.

And Zwane's was not a case of scoring a lot of goals in the early qualifying rounds - where he scored just once‚ in the 7-1 aggregate win against Leones Vegetarianos.

Sports Minister Nathi Mthethwa has lashed out at Bafana Bafana after their "poor performance" against Ivory Coast in their opening match of the ...
Sport
2 years ago

It was a mark of his consistency and class that the winger scored five of his goals in the group and knockout stages‚ including one in the 5-0 home leg quarterfinal win against Al Ahly - a result that has Sundowns still very much on both Ahly's and Zamalek's supporters' tongues here in Egypt at the first mention of South Africa.

"I'm happy I was among the top scorers in the Champions League - it shows I was doing something right‚" Zwane said.

"It was a good experience. Every time I play on the continent I learn a lot. There are good‚ quality players that I come up against.

"I want to take that form into the Afcon finals. I want to push myself wherever I can."

Namibia coach Ricardo Mannetti has made it an open secret that Bafana are the Group team for his side‚ who parked the bus going down to an 89th-minute own goal against Morocco‚ to beat if the Brave Warriors are to achieve their aim of a first Afcon finals win in their third qualification.

Bafana Bafana not as bad as many believe‚ says Delron Buckley

Delron Buckley believes Bafana Bafana's performance against Ivory Coast was not as bad as many have made out‚ but wants the team to show more ...
Sport
2 years ago

"We know they're going to come at us. We need to be organised‚ keep the ball‚ play with those combinations‚" Zwane said.

Zwane‚ goalkeeper Ronwen Williams‚ and the back four showed that Bafana can compete on an equal footing at the continental showpiece‚ but more of their stars need to come to the party.

Another name on everyone's lips in Egypt is of Zimbabwe's in-form little Kaizer Chiefs playmaking star Khama Billiat - seemingly a target of the big clubs here.

If Billiat can manage that‚ why not his former Sundowns teammates such as Zwane and Percy Tau?