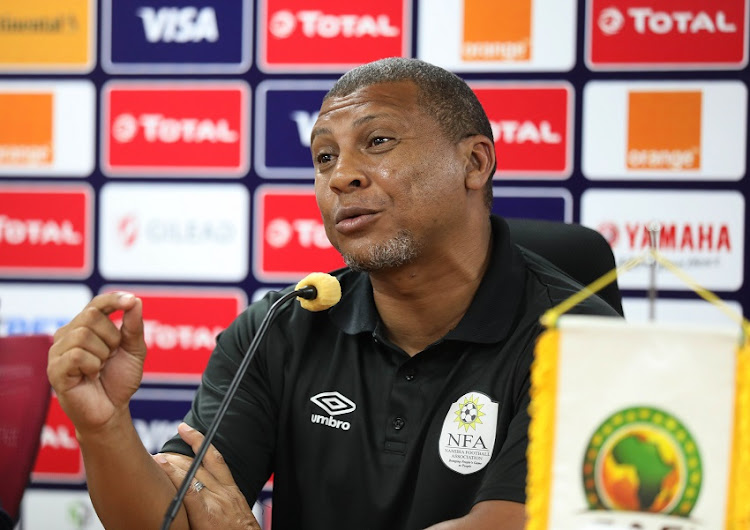 If football games were won in the press conference room‚ Ricardo Mannetti would have steered Namibia to victory at the 2019 Africa Cup of Nations against South Africa without a ball being kicked.

Of course‚ they are not.

But Mannetti's inspired‚ humorous‚ charged-up display in front of the microphones‚ such a contrast to Bafana coach Stuart Baxter utilising his briefing to scold South Africans for their public backlash to his team's opening 1-0 defeat against Ivory Coast‚ should serve as a warning to the supposed favourites.

Namibia are fired up.

They held Morocco until the 89th minute of their opener in searing heat at Al Salam Stadium on Sunday until Iitamunua Keimuine scored the unfortunate own goal.

They view the game against South Africa as their best opportunity to earn their first victory at the Nations Cup in their third appearance there.

For Namibia‚ the Cosafa Cup is their Nations Cup‚ because it's a trophy they can compete for.

The Afcon is their World Cup‚ where they are happy to qualify‚ gain experience‚ and cause some upsets.

Mannetti has not hesitated to take selfies‚ even in Al Salam Stadium's press conference room.

“This is our World Cup. We are here to make memories‚" the coach said.

“The last time we were here was 11 years ago. Me taking a picture of a memorable time‚ sitting here - it's not every day you will find a Ricardo Mannetti‚ a local boy‚ born and bred in Namibia‚ sitting here with Hervé Renard‚ here on top being in a press conference.

“It's not every day where you will find this young man sitting next to me [midfielder Ronald Ketjijere] from a village called Okakarara.

“This is our World Cup and we want to make memories on the field and off the field. And prove to you that we are a team who want to be taken seriously. “So we take this opportunity very seriously. And‚ yes‚ do you expect me not to enjoy my moment? I got criticised for the past seven years by Namibians - 'He's not good enough‚ he won't go to Afcon.

"And you don't expect me to take a picture? In fact‚ I want to take a picture right now with all those cameras there‚ so I can show my kids one day that their father sat there with the top coaches in Africa.

"I had to outsmart Hervé Renard. Do you guys understand what it means to Ricardo Mannetti to want to outsmart a top coach like him?

"Tomorrow I have to outsmart Stuart Baxter. If it was a boxing match I was not going to be allowed in the ring. But now I'm allowed. So this is Namibia's moment. This cannot be taken away from us.

"Please let us enjoy this moment. We are not here to lift the cup. We are here to gain experience‚ to make memories‚ to upset things. So please‚ allow us that little moment in the sun."

Namibia barely bothered to even counterattack against Morocco‚ utilising the heat to their advantage and parking the bus.

They will surely still be set up to frustrate Bafana‚ but they will be more attacking than in their opener‚ with Highlands Park deep striker Peter Shalulile and Bidvest Wits winger Deon Hotto certainly capable of running at SA's defence.

Morocco and Ivory Coast meet in a match-up of heavyweights in Group D's early fixture at Al Salam Stadium at 7pm.