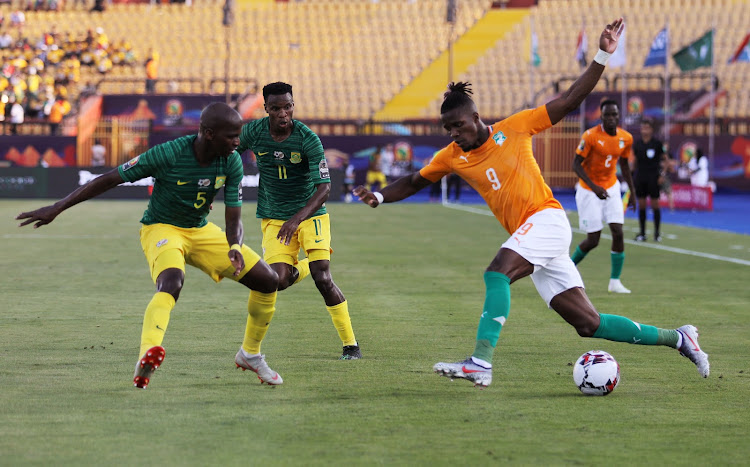 Thamsanqa Mkhize is Bafana Bafana's right-back warrior‚ a late bloomer who at 30 is loving the opportunity of mixing it up with the likes of Nicolas Pepe and Jonathan Kodjia at the 2019 Africa Cup of Nations.

Over Bafana's two games - the nervy 1-0 defeat against Ivory Coast in searing heat‚ then Friday night's perhaps as anxious 1-0 win against Namibia - Mkhize has impressed as a constant of confidence.

This from a player with less than 10 international caps.

"For me it's an honour. I'm just grateful that I'm being recognised for all the hard work‚" the man from KwaXimba‚ outside Cato Ridge‚ between Durban and Pietermarizburg‚ said.

"I have to thank the national team coaches‚ and also my coaches at Cape Town City. They are the ones who always help me improve as a player‚ so I'm grateful."

If Bafana have been awkward on this big stage‚ they finally settled into some form of passing rhythm that looked half-relaxed after Bongani Zungu headed SA ahead in the 68th minute against Namibia.

"Obviously it was going to be a very difficult game playing Namibia.

"But then we wanted to make sure that we created a lot of chances‚ because in the first game against Ivory Coast we couldn't create‚ we couldn't have one shot on target‚" Mkhize said.

"The important thing was to get an early goal. We couldn't. So we kept on pushing‚ pushing‚ hoping to get that chance to score.

"Fortunately we did. And then everyone was a bit at ease‚ and could play football with confidence‚ and play those combinations."

Morocco were intimidatingly explosive putting away Ivory Coast 1-0 in a game of high class on Friday.

They have reached the last-16‚ but want to finish top of the group. A draw will be enough for the Atlas Lions to do that.

There would appear to be a gulf in class from Bafana.

But‚ with that bit of confidence from a goal and a victory‚ who knows what to expect from this unpredictable South Africa.

"For us‚ the most important thing was to get past the game against Namibia‚ and make sure we got the maximum points‚ so that we'll play our final game against Morocco having that confidence of winning‚" Mkhize said.

"Definitely‚ the mood is a lot better now. For any team‚ you need that win to settle the nerves‚ and make sure you keep on grinding‚ grinding results."

With the four best third-placed finishers from six groups also reaching the last-16‚ three points might just be enough for Bafana to progress.

But they would prefer a draw against Morocco to make sure.