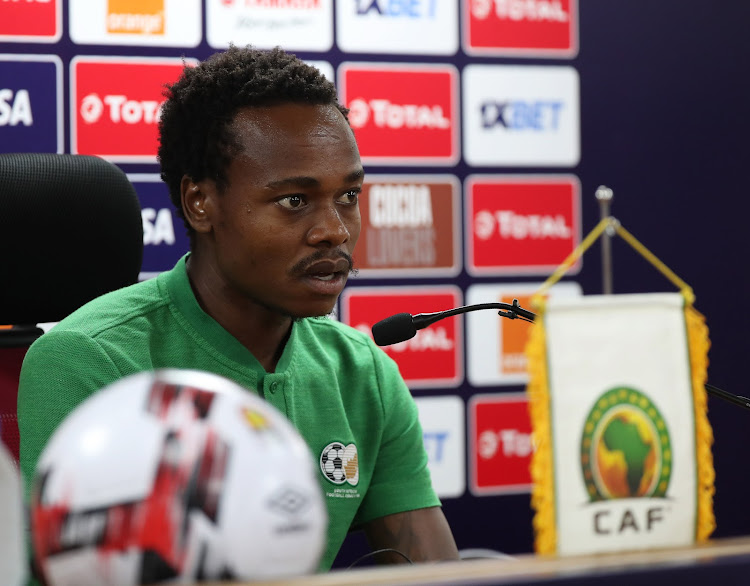 Percy Tau wants to be the best version of himself‚ test himself against the biggest players‚ and learn as much as he can at the Africa Cup of Nations (Afcon).

It is safe to say Tau has not shone yet as he is capable of for Bafana Bafana at Egypt 2019.

It can be hard to be the creative star everyone expects to make things happen - as Tau did with two spectacular strikes against Libya that clinched South Africa's qualification in March - going into a major tournament.

Tau was not helped by Bafana's attack not functioning in their well-structured but overly cautious 1-0 opening defeat against Ivory Coast‚ and then that South Africa were disjointed beating Namibia 1-0.

But a glimmer of hope is provided‚ as Bafana line up against Hervé Renard's intimidating Morocco in their final Group D game at Al Salam Stadium on Monday (kickoff 6pm)‚ that once Bongani Zungu headed South Africa ahead kin the 68th minute against Namibia finally Bafana settled into some form of confidence on the ball.

It's encouraging‚ too‚ when players relax enough to crack small jokes in the pre-match press conference. Tau was asked about how SA appeared to string better touches together after scoring against Namibia.

"That goal meant so much to us‚ because it gave us three points. Unfortunately Bongani Zungu doesn't know how to celebrate. If it was me‚ I was going to be dancing‚" Tau said with a grin.

"So ja‚ hopefully in the next match he will be dancing - just get his moves right."

Tau's confidence has been growing on this huge stage. He won man-of the-match despite looking fairly lost out on the right against Namibia.

The Belgian-based ex-Mamelodi Sundowns star does not feel the need to prove himself in a game where the chips are down against Morocco.

"Ja‚ look‚ I think if it was a game for introduction I would have done it at the Club World Cup [with Sundowns in 2016‚ where Tau did shine]‚" the player said.

"So I think it's never at that point. I'm at a stage in my career where I want to develop and get better. I feel I'm at my peak.

"And being that‚ I'm trying to see the best Percy that has ever been seen. And trying to see that‚ at the end of my career‚ would I be able to say that the 2019 Afcon was the best Afcon ever?

"I'm trying to see where I can learn‚ and judge myself. I'm just looking at it as a test where I can actually give it all and get better‚ and try and understand international level better.

"This is my first international competition with the national team. So for sure I'll look at it as a positive experience for me."

Many South Africans seem to have written off the chances for Bafana against Morocco.

On Bafana's patchy form‚ and the quality shown by Morocco beating Ivory Coast 1-0 in their last game‚ SA should not get a result. But there are some tentative factors in their favour.

Bafana are unpredictable and you never know which team will show up. The Namibia win‚ scrappy as it might have been‚ does appear to have lifted the nerviness.

The game kicks off at 6pm‚ and in the first half temperatures will still be above 30 degrees Celsius.

Morocco‚ who need just a draw to top the group‚ face seven matches if they are to achieve their aim of winning the Nations Cup.

With the summer heat factor‚ they have to conserve energy somewhere‚ and this match would be the best place‚ especially after a bruising match-up beating the Elephants.

So Bafana might have just a sniff at a result.

A draw might yet prove enough for South Africa to advance at the Africa Cup of Nations but they would be playing Russian roulette if they are relying ...
Sport
2 years ago