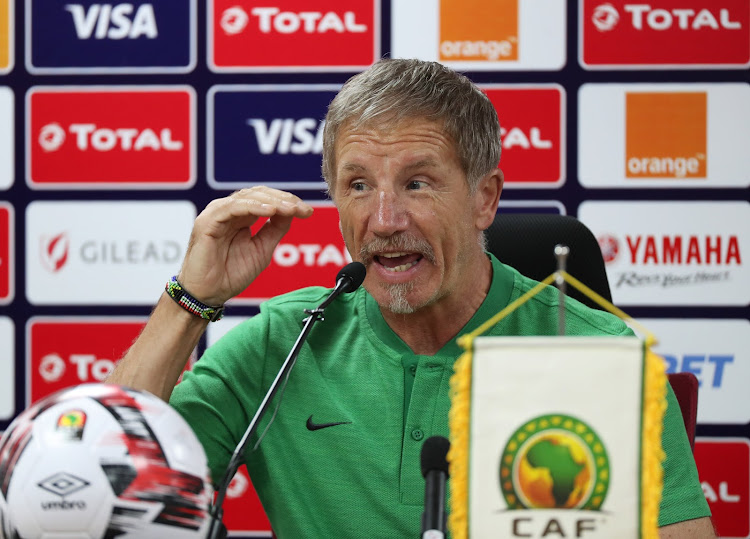 Stuart Baxter has done something of an about-turn‚ saying now that he understands why Bafana Bafana supporters get so upset when results go against the national team.

Bafana coach Baxter last week‚ ahead of South Africa's 1-0 Africa Cup of Nations (Afcon) win against Namibia on Friday night‚ reacted to some of what he perceived as over-reaction at home to the team's opening 1-0 defeat against Ivory Coast with a rant about South Africans being unrealistic.

One particularly ill-advised comment was: "It annoys me sometimes when we hear of the 56 million behind us.

"When in reality‚ there’s not 56 million behind us. There’s 56 million waiting to chop our heads off."

It's a movie South Africans have seen before - Bafana coaches‚ under pressure‚ making rash statements.

After a first win at Egypt 2019 the coach looked more relaxed‚ and seemed contrite moving to express that he does understand the passion of South African football fans‚ their long-time suffering over the underachievement of the national side‚ and disappointment when Bafana lose.

Baxter was speaking in his pre-match press conference for Bafana's third Group D match against Hervé Renard's imposing Morocco at Al Salam Stadium on Monday (kickoff 6pm)‚ where South Africa are likely to need at least a draw to reach the last-16.

"You know‚ we've got to think about everybody always comparing the team to the 1996s [Bafana's Afcon-winning team on home soil]. That was a totally different time‚" Baxter said.

"In 1996 [Nelson] Mandela had just come in with that government‚ everybody was optimistic in the country.

"The hopes and the dreams which that team reflected - our country's not the same at the moment. People are not as hopeful.

"So we have really been given the mantle of‚ 'Give us hope'. And that's a pretty heavy burden sometimes."

Baxter said such levels of expectation do not make his job‚ or the players'‚ easier.

"The national team is a great passion for everybody. People are asking us to give them something to be happy about‚" the coach said.

" ... Everybody wants that. And when they don't get that‚ the massive disappointment comes out in different ways.

"Now‚ we've had that for a long time in South Africa. It's been gradually building up. So the patience is very thin now.

"I know that‚ I get on with my job and I don't react. Because that would just make me do my job worse."

The coach's about-turn showed‚ once again‚ how the pressure of the job affects Bafana coaches.

Does it matter? Not really. What really matters is that Bafana need to get a result against Morocco.

With the four best third-placed finishers from six groups also reaching the last-16‚ three points might just be enough for Bafana to progress.

But‚ as things are shaping up in other groups‚ hoping for such a scenario seems a stretch. SA would prefer a draw against Morocco to make sure.

Midfielder Thulani Serero has got the nod in an attacking Bafana Bafana eleven to face Morocco at Al-Salam Stadium in the Egyptian capital Cairo on ...
Sport
2 years ago

Bafana vs Morocco: Who are the danger players Baxter's men need to look out for?

Bafana Bafana tackle Morocco in their crucial 2019 Africa Cup of Nations (Afcon) clash on Monday evening where they hope to do enough to seal a place ...
Sport
2 years ago

"I'm not cheap‚" was Morocco coach Herve Renard's blunt message to the SA Football Association (Safa) on Sunday from the 2019 Africa Cup of Nations ...
Sport
2 years ago