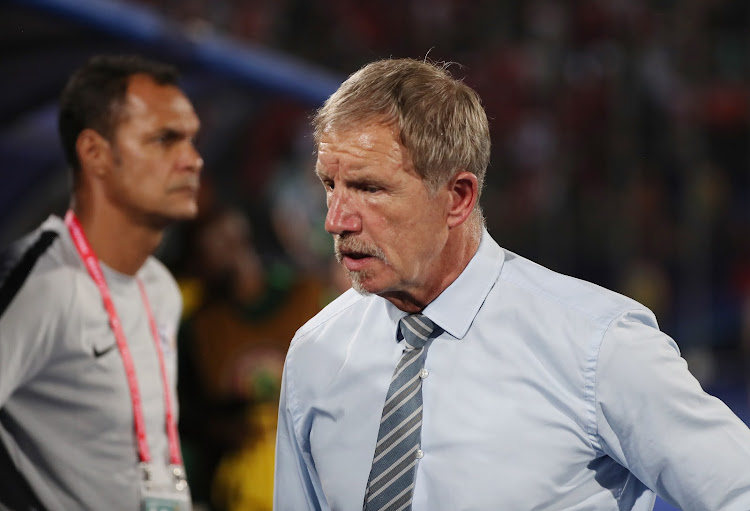 Embattled Bafana Bafana Stuart Baxter cuts a frustrated figure in his technical area during a 1-0 Afcon defeat against Morocco in Cairo on July 1 2019.
Image: Gavin Barker/BackpagePix

Bafana Bafana have not been overly negative at the Africa Cup of Nations (Afcon)‚ centreback Buhle Mkhwanazi has insisted‚ saying that he believes compact‚ counterattacking football is the trend in football today.

South Africans have howled in dismay at the conservative tactics of Bafana coach Stuart Baxter at Egypt 2019.

On Monday‚ the strategy of the coach‚ even when he had named an attacking starting XI needing a draw in Bafana's final Group D match-up against Morocco at Cairo's Al Salam Stadium to reach the Last-16‚ of courting trouble by playing far too deep in the second half led to the Atlas Lions' 90th-minute winner by Mbark Boussoufa.

Mkhwanazi‚ afterwards‚ defended such an approach in the tournament - South Africa appeared overly timid in their 1-0 opening defeat played in searing heat against Ivory Coast‚ then could only scrappily beat group underdogs Namibia 1-0 - as the modern trend.

Bafana Bafana will be anxiously watching Tuesday night's matches at the Africa Cup of Nations to see if they will squeeze into the Last 16 despite ...
Sport
2 years ago

"To be honest‚ according to myself‚ it is all about being compact and catching teams on the break‚" the Bidvest Wits defender said.

"And if you can catch them on the break‚ playing that kind of football‚ I think that's a trend of now.

"Teams are starting to adapt to a different style of play. And it suits whoever is in the pitch‚ and the formations.

"So I don't see any negative football. It's all about how you're playing‚ and the formations and the strategy of the teams you are applying and playing against."

Conservative football has not necessarily been the trend of this Afcon finals‚ though‚ where Bafana have been one of the most defensive teams.

And if Mkhwanazi says counterattacking football is necessary‚ especially for a team like South Africa who do not have the European-based star quality of Morocco and Ivory Coast‚ why have Bafana not attacked more?

Because even their counterattack against the group heavyweights was conservative‚ from a coach in Baxter for whom transition football is a strength at club level.

Bafana are not out of the competition yet - but their calculators are out.

The four best third-placed teams from six groups progressing to the last-16 have made it impossible for Bafana to know if they have made it until all the group stage matches on Tuesday night have been completed at around 11pm.

SA sports fans lashed out at retired midfielder Steven Pienaar after the former Bafana Bafana captain took to Twitter to make a comment about the ...
Sport
2 years ago

If‚ by some turn of fortune‚ Bafana remain in the competition‚ then hosts Egypt at Cairo International Stadium on Saturday; or Madagascar‚ Group B's hard-working‚ shock victors - 2-0 winners over Nigeria - await in the last-16.