Twitter wants Stuart Baxter out, even after Bafana Bafana's Afcon win against Egypt 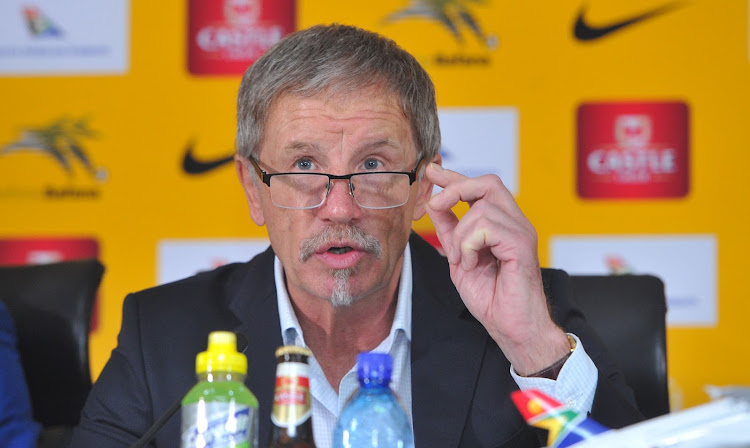 South Africans are calling for the removal of Bafana Bafana coach Stuart Baxter, even after the team beat Egypt on Saturday.
Image: Sydney Mahlangu/BackpagePix

Bafana Bafana may have managed to redeem (kinda) themselves after their unexpected victory against Egypt in the Africa Cup of Nations (Afcon) in Cairo on Saturday, but the same cannot be said for their coach, Stuart Baxter.

South Africans are taking to Twitter to call for Baxter's removal, for what they perceive as "the team's sabotage". This  stems from the exclusion of Orlando Pirates' Thembinkosi Lorch from the Afcon match on Monday last week, in which Bafana Bafana were defeated by Morocco.

The loss angered many, partly because they felt Percy Tau's efforts could have resulted in a win had Lorch been on the field.

As things stand, tweeps are divided over why Baxter decided to give Lorch a chance to play in Saturday's match. Some attributed this to social media pressure following defeat by Morocco, while others felt it was due to Themba Zwane's suspension.

Apart from Lorch, Baxter had Sibusiso Vilakazi and Lebohang Maboe to choose from as Zwane's replacement.

Stuart Baxter must still vacate his position for almost letting personal vendettas get us knocked out.

#BaxterOut Baxter Mabena must still vacate. Last night's win came about, us as fans, made noise about Thembinkosi Lorch's absence and he fielded him and Zwane's suspension helped.

#BaxterOut I'm still saying, regardless of the win against Egypt. He must still go, we need a coach who will understand fast pace football and kasi style kind of play.

#BaxterOut One thing our clueless coach must understand is that SA is a football playing country don't care who says what Baxter nearly cost Country, Lorch played because Zwane was suspended not because Baxter saw any good in him.

#BaxterOut he must vele, we the fans can setup a team better, and it’s been proven by last night’s match, this is no a club level competition it’s an entire country, you can’t do as you please. We pay you.

Bafana Bafana coach must still get sacked, regardless of how far he gets in the competition. #BaxterOut pic.twitter.com/KRIiKllS7o

Makahambe... he hasn’t done nothing good for the country. He’s so arrogant and stubborn... he must go #BaxterOut

#BaxterOut
We won yesterday, but Baxter still has to go. He's not the right man to lead us.
If it wasn't the pressure from social Media, #Lorch wouldn't have played.
Baxter plays his favourites players and they do nothing on the pitch...#BaxterOut #BaxterOut #BaxterOut

I fully support the #BaxterOut Momevent. I am not saying he is a bad coach. I just dont want him to coach the National Team and/or Orlando Pirates pic.twitter.com/BfQNxhj7LC

The incumbent Bafana Bafana coach was not even on shortlist

Four foreigners and one South African formed the five-man list of prospective candidates for the vacant Bafana Bafana job following the firing of ...
Sport
2 years ago

With five minutes remaining, having bossed Egypt in the first half, and frustrated them in the second, Thembinkosi Lorch got through alone on a ...
Sport
2 years ago

Bafana Bafana take on hosts Egypt in their Africa Cup of Nations second round clash at the intimidating Cairo International Stadium on Saturday night ...
Sport
2 years ago

Bafana Bafana need to be as structured as they were in the group stages while also finding a way to hurt Egypt in attack to stand a chance of an ...
Sport
2 years ago