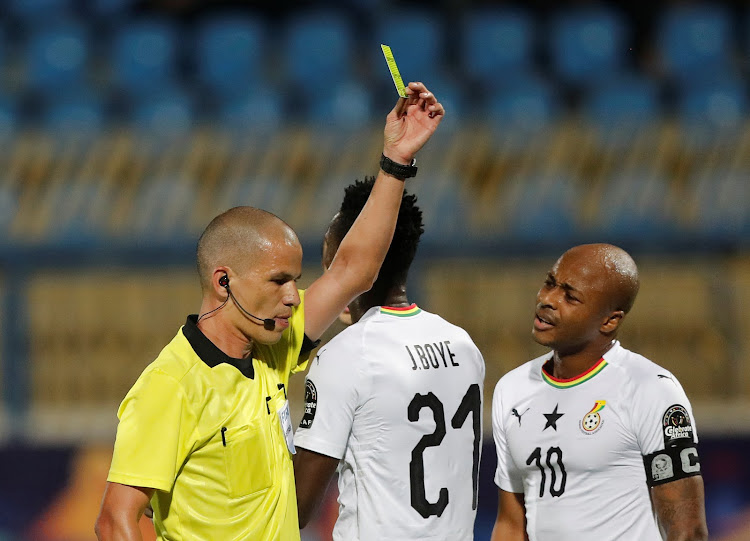 Ghana's John Boye is shown a yellow card by referee South African referee Victor Gomes during the round of 16 match at the Africa Cup of Nations finals at Ismailia Stadium in Ismailia, Egypt, on July 8 2019.
Image: REUTERS/Amr Abdallah Dalsh

Victor Gomes had been trumpeted as the referee for Friday’s Africa Cup of Nations (Afcon) but these reports in various newspapers and on social media seems to have been a cruel hoax.

An investigation into why the Confederation of African Football’s media department sent out a tweet‚ still deleted‚ announcing the Johannesburg-born referee as the man in the middle for the final has been launched after it emerged that Gomes was never going to do the game.

Instead‚ the Confederation of African Football (Caf) have now formally announced that Cameroon’s Alioum will take charge of the clash between Algeria and Senegal at the Cairo International Stadium with two of his compatriots on the line.

South Africa’s Zakhele Siwela will be one of the assistants in the Video Assistant Referee’s booth.

Owen da Gama believes Bafana Bafana will be better off with a new coach at the helm.
Sport
1 year ago

Alioum‚ Caf sources told TimesLIVE on Thursday‚ was already appointed to the final after the quarterfinals but the appointment‚ as is customary‚ was kept secret until the eve of the game.

The choice is made by the Caf referee’s committee but there is also input from the various instructors and assessors at the tournament.

Caf sources said Gomes was among those recommended but he was not first on the list.

Why his name was released by Caf’s tweet remains unclear but there could be some heads that might roll for the mistake.

Senegal moved a step closer to a maiden Africa Cup of Nations (Afcon) title with their semi-final victory on Sunday but will be without key defender ...
Sport
1 year ago

At the start of the week‚ various leaks suggest Bamlak Tessema of Ethiopia would be the man in charge‚ even though he did the semifinal between Senegal and Tunisia and was the centre of a controversy when he overturned his own penalty call in favour of the Tunisians late in extra time.

Then it was suggested Gomes would do the final‚ even though that also seemed something of a long shot after his controversial decision to rule out a Ghana goal in their last-16 loss to Tunisia.

Alioum‚ who uses just one name‚ is sometimes called Alioum Neant (nothing) or Alioum Alioum.

The Cameroonian‚ who turned 37 on Wednesday‚ was in charge of the opening game at the tournament and has spent 12 years on the Fifa panel.