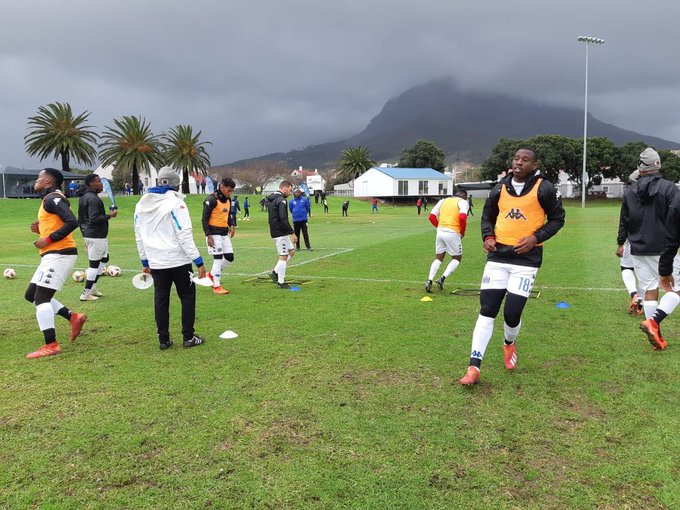 SuperSport United players during a training session in Cape Town. The three-times league champions have set up camp in the Mother City ahead of the new season.
Image: SuperSport United/Twitter

Getting off to a good start is going to prove key to SuperSport United’s hopes of chasing for the Absa Premiership title in the coming season.

This view was offered by coach Kaitano Tembo as the club headed back to Johannesburg from Cape Town on Wednesday after spending a week at the High Performance Centre in Stellenbosch.

“It is key for us to have a good start but we have four tough games to begin with.

"Those games will map out the rest of our season‚” said Tembo.

The club have been handed a horror start in their league programme – beginning with a derby against champions Mamelodi Sundowns at Atteridgeville and then playing Orlando Pirates at home‚ Kaizer Chiefs and Baroka away.

“We always want to go out and compete and make sure we fight.

"We are also in the mix of the teams who want to win the league‚” he told TimesLIVE.

“We started on June 18 and we’ve had two camps now‚ first in Polokwane from July 1-7 and now this one in Cape Town up until (Wednesday).

“I’m really satisfied with the amount of work which we’ve put in.

“We focused on the tactical as well as the physical part.

“I think the boys are in good shape.

“We’ve avoided any major injuries and we hope that we’ll continue through the season injury free‚” he added.

Tembo said staying injury free would also be crucial to their chances.

“Last season we started well but then all of a sudden we had about four of our top and most influential players out because of injuries.

“Our rhythm was compromised‚ we had to start again and find new combinations and that’s when we started introducing a new young players to get game time.

“I think it will be a little bit different this season. I think we’ll have a good start this time round‚ looking at the fitness level of the boys.”

There is also the possibility of one or two more signings coming before the end of the month.

Newly promoted Stellenbosch FC are set to be homeless for at least the first six months of the season‚ forcing them to move outside the town and ...
Sport
2 years ago

The club have only brought in Thamsanqa Gabuza and Kudakwashe Mahachi from Pirates.

“We are trying to play as many friendlies as we can‚ so that we can polish the combinations and trying to make sure they understand the way we do things and try and bring them up to speed‚" he said.

"We are playing again at the weekend.”

Evans Rusike is back from playing for Zimbabwe at the Africa Cup of Nations while Dean Furman and Ronwen Williams will return later this week.

“We had to give them time off to spend with their families after the tournament‚" he said.

“There will be enough time for them to get ready for the start of the new season because it’s not like they were off on holiday.

“They had been in camp for 41 days with Bafana and they needed time to just go and relax.

“I know they are professionals‚ I trust them. They will look after their fitness levels.”