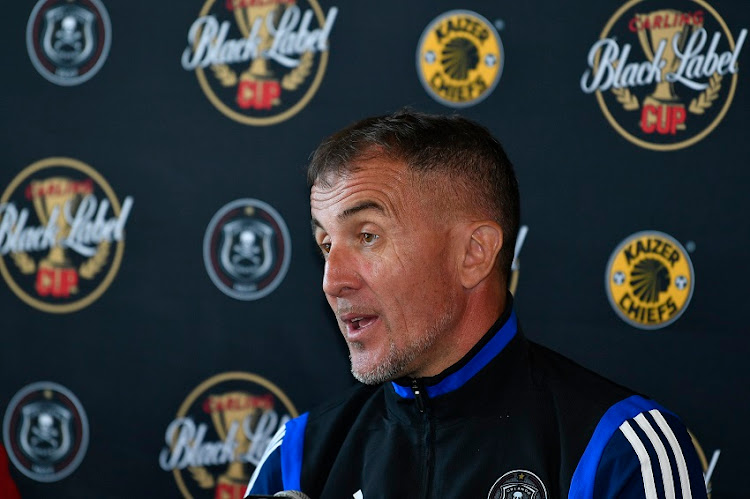 Milutin Sredojevic believes a string of signings made by Orlando Pirates can help the team fit the missing pieces of the puzzle‚ and find that extra 10 percent they have been lacking‚ to win trophies and perhaps also a league title in 2019-20.

Sredojevic enters his third season in his second stint as coach of the Buccaneers having put in maximum effort in his first two campaigns and fallen just short of silverware in both.

With an army of boffins in Sredojevic’s technical team last season‚ good signings and a strong squad‚ Bucs were runners-up in the Absa Premiership for a second time in succession to Mamelodi Sundowns‚ but closed the points gap from five to three.

They lost with 10 men against Baroka FC in the Telkom Knockout final in December.

Bucs have made some strong signings for 2019-20 – including Fortune Makaringe and Siphesihle Ndlovu from Maritzburg United‚ and Tshegofatso Mabasa and Bongani Sam from Bloemfontein Celtic.

With nine additions in total‚ though‚ and some of those seemingly more squad players‚ Sredojevic has challenges again of a large complement of players to juggle and keep satisfied with sufficient game time.

“After two competitive seasons we have done a deep analysis‚ and in that we have recognised that in those two years there were some missing pieces of the puzzles‚” the coach said.

“We believe that those nine players are exactly pieces that can help us‚ so that our mosaic is the best picture that our supporters are dreaming about.

“We believe that puzzle will bring players in some positions who will not necessarily just walk into the team but will increase competition.

“So that in every position we have two or three players as cover‚ and given time you could use them‚ having in mind that the matches will come fast‚ and we are expecting to have seven to eight games already in the month of August.

“There is then the smart strategy of possibly rotating. And when you have that in mind‚ it will not be a headache. It will be important that any player's presence or absence will not be felt because immediately there are players who can jump in.

“Players pushing each other‚ competing for places‚ looking to earn and deserve places in the team‚ is something that we were looking for.

“And we believe this will increase and lift us so we can reach that 10 percent that we have needed [to win trophies‚ or a league title].

“But at the same moment you need to know that we need to prove on the field of play that the players we have brought in are the ones who have been missed.”

Pirates reached the group stages of the 2018-19 Caf Champions League in their return to the competition since being finalists in 2013.

They will aim to go further in 2019-20‚ and this‚ combined with ambitions in three domestic cups and the league (five competitions in all) could see Bucs play 50 or more matches‚ which will provide opportunities for the full squad to be utilised.