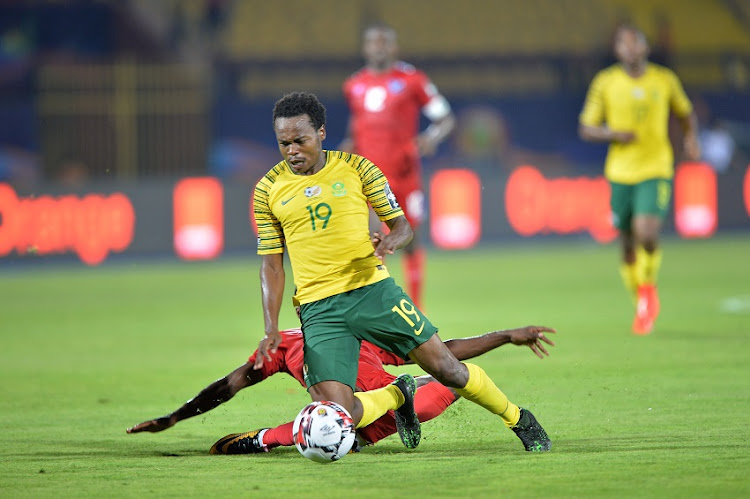 Percy Tau of South Africa during the African Cup of Nations match between South Africa and Namibia at Al-Salam Stadium on June 28, 2019 in Cairo, Egypt.
Image: Ahmed Hasan/Gallo Images

Percy Tau has been loaned to Belgium again with the specific purpose of developing his talent at the highest level‚ say his club Brighton and Hove Albion.

For a second season‚ Tau is to play in Belgium‚ but this time at frontrunners Club Bruges in the top-flight rather than Union St Gilloise where he was in the second tier last season and chosen as the best player of the division.

Unable to get a work permit in England because of the lowly position of South Africa in the FIFA rankings‚ Brighton have concluded a loan deal for the season with Bruge but pointedly without an option for an outright purchase in a clear signal that he is earmarked for the English Premier League next season.

“Tau played a tremendous Africa Cup of Nations and we want his talent to develop at the highest level‚” said Dan Ashworth‚ Brighton’s technical director.

“Club Bruges were an interesting option because he gets a chance to play there in the Champions League.”

Bruges play next week already in the thirds preliminary round against Dynamo Kiev of the Ukraine and must go through two knockout rounds if they are to secure a place in the group phase.

Bruges first play at home this Friday in their second game of the Belgian league season but that might come too early for Tau‚ who only had his first training session with his new teammates on Monday.

But he could be ready for next Tuesday’s first leg of the Champions League tie at the Jan Breydel Stadium.

In the meantime‚ Bruges added 4000 South African followers to their Facebook page within hours of Tau signing for the club‚ said a sports marketing agency in Brussels.

“We expect it is a number that will continue to grow dramatically‚” added social media expert Alexandre De Meeter from the agency Sportimize.