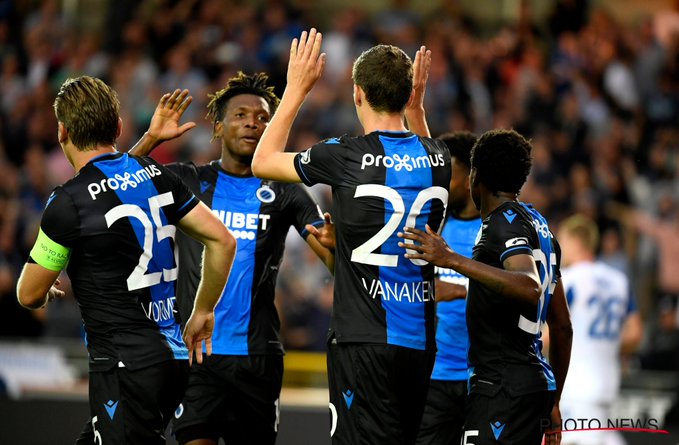 Club Brugge players celebrates after scoring a penalty during the UEFA Champions League qualifying round football match between FC Dynamo Kiev and Club Brugge at the Jan-Breydel stadium in Brugge on August 6, 2019.
Image: TWITTER/Club Brugge

Percy Tau got his first taste of UEFA Champions League action on Tuesday night but his Club Brugge KV side made heavy work of the first leg of their third preliminary round tie against Dynamo Kiev.

Brugges won 1-0 with a first half penalty and therefore take a tenuous lead to the Ukraine for the second leg in one week’s time.

They must get through this round and then beat either FC Basle of Switzerland or LASK Linz from Austria if they are to qualify for the group stage.

Tau was a starter for his second successive game just eight days after his first training session with his new club, who he joined on loan from Brighton and Hove Albion for the season.

But this time he completed the entire 90 minutes.

After scoring in his debut on Friday, as Brugges thumped St Truiden in the Belgian league, Tau found matters much harder against a negative Kiev side, who played a spoilers’ game and never allowed their hosts to create any flow to their game.

Brugges manager Philippe Clement had warned his players before the game that the Champions League assignment would be a lot more difficult than their local league clash and so it proved.

Brugges, who looked sprightly in the opening exchanges but then began to be frustrated, got their only goal from a penalty converted by Hans Vanaken in the 37th minute.

Tau had two chances to make an impression with runs behind the defence on the right but was unsure at the decisive moments and had his efforts on goal easily blocked.